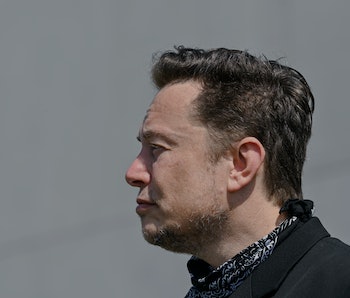 Tesla CEO Elon Musk was uncharacteristically downbeat yesterday, when he tweeted that the latest beta of Tesla’s fully autonomous driving software “is actually not great imo.” The automaker tests its most cutting-edge versions of Full Self-Driving (FSD) internally and among a small group of customers.

Much scrutiny has been placed on Tesla for the way it’s offered customers access to advanced self-driving features before they’re ready for primetime. Last week, the U.S. National Highway Traffic Safety Administration (NHTSA) opened a probe into Tesla’s self-driving software, citing the cars’ repeated collisions into parked emergency vehicles. The agency says most of the incidents took place after dark, with the Tesla software ignoring emergency road markings such as flares.

Self-driving software from Tesla uses a series of cameras to see the road ahead, including any obstacles that might be in the way. Advanced machine learning is taught how the vehicle is supposed to drive, and Tesla hopes that all the cars it has on the roads today could feed data back to the company and improve its systems over time. But Tesla has enabled features in customer’s vehicles early and has only half-heartedly warned them to continue watching the road.

Deja vu — Despite a string of accidents — and a slew of media reports documenting Tesla drivers abusing the technology to speed or even go to sleep — Musk has repeatedly over the years promised that his company’s cars would soon be fully autonomous, only to push the timelines back. Tesla charges customers $10,000 upfront, or $199 per month, to access the advanced driver technologies with the promise that they will improve over time, but the delays have frustrated customers who expected autonomous driving to be here by now.

“FSD Beta 9.2 is actually not great imo,” Musk wrote in a tweet about the latest beta of Full Self-Driving. “But Autopilot/AI team is rallying to improve as fast as possible. We’re trying to have a single stack for both highway and city streets, but it requires massive NN [neural network] retraining.” He did add, however, that he’s tested the subsequent version, 9.3, and that it’s “much improved.”

Tesla recently responded to scrutiny about its record of safety by enabling cameras inside the cabins of some of its vehicles so that it can monitor and ensure the operator is paying attention when driver assistance is enabled.

Technical challenges — The problem for Tesla is that it was over-optimistic in its early projections. Teaching a computer to follow lane markings on a road proved easy; everything since has been anything but. Humans are unpredictable, and computers struggle to figure out how to safely navigate around them. The margin of error also has to be very low — Musk wants FSD to be 1,000 percent safer than a human driver — so cars from Google’s Waymo and others tend to drive very cautiously (read: slowly).

Despite the hurdles, Waymo and others have begun testing their vehicles with actual customers to some success. And nobody is denying that autonomous driving, when it does arrive, will offer major benefits to society. It’s just that Musk’s delays are the same story on a different day.