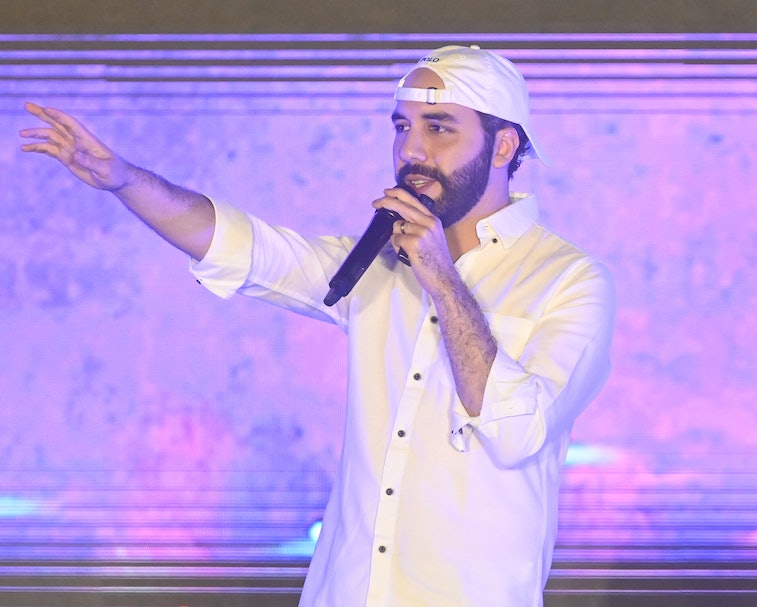 El Salvador is in the process of creating a so-called “Bitcoin City” backed by cryptocurrency bonds, Reuters reports. President Nayib Bukele announced the city’s planning at a packed arena of cryptocurrency fans on Saturday night.

Cryptocurrency underpinnings won’t be the only oddity Bitcoin City (the city’s actual name hasn’t been announced yet) has in store. The city itself will be built at the base of the Conchagua volcano, which Bukele hopes will provide it with enough geothermal power to create an extensive bitcoin-mining rig.

Bukele hasn’t provided all that many specifics about what the city will look or feel like. It’s the concept here that’s important: The city will be created using bitcoin bonds and will operate without any taxes other than a value-added tax (VAT). Half the proceeds of VAT collection will go toward services like garbage collection; the other half will fund the bitcoin bonds.

Bukele’s decision to turn bitcoin into legal tender in El Salvador has been met with harsh criticism. He obviously hasn’t let that criticism get to him much; if anything, the hate has become fuel for his bullish fire.

All about those bonds — Bitcoin City’s name will be triply apt. The city will use geothermal heat to mine more bitcoin; it will be backed by bitcoin bonds; and it will, of course, have a central plaza that looks like the bitcoin symbol when you’re flying above it.

A $1 billion, 10-year “volcano bond” issued by El Salvador will provide most of the funding for the city’s creation. Half that bond will be used to purchase and hold bitcoin for five years, while the latter five years of the 10-year period will be used to sell off the bitcoin.

El Salvador is hoping to attract investors in Bitcoin City by offering to return 50 percent of any money made off bitcoin sales to investors — anything past the initial $500 million, of course. They’ll end up with that cash on top of the bond’s 6.5 percent annual interest rate. Whether or not that investment pays off will largely depend on if the price of bitcoin sees a net increase over the next 10 years. If you’re interested in the minutia of that investment strategy, Bloomberg’s Matt Levine has a great explainer here.

A rocky start — El Salvador’s decision to accept bitcoin as legal tender is a bet to save big on remittance costs, but it’s also very much the president’s pet project. He’s pushing bitcoin hard and truly seems to believe cryptocurrency can be El Salvador’s savior.

For the average person, though, the extreme volatility of bitcoin’s pricing is a lot to get used to. As is just learning how cryptocurrency works — it’s not exactly common knowledge yet. The benefits Bukele has been pushing have yet to materialize for the average citizen.

If all goes well (and that’s a big if), Bitcoin City could make serious money for El Salvador. It’ll also benefit early investors who believe in the project. For most Salvadorans, though, it’ll just create more space between them and the wealthy.