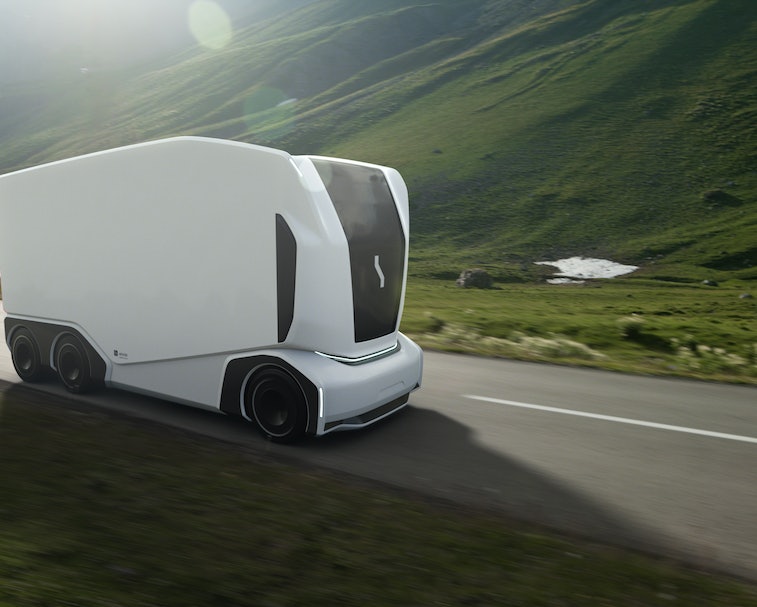 Sweden's Einride has made its self-driving truck, the Einride Pod, available for pre-order. The vehicle, which has the appearance of a moving filing cabinet, is unique from other autonomous trucks in that it has no driver's cab. When shipments begin next year, the battery-powered truck will be able to haul up to 16 tonnes over 110 miles on a charge.

Businesses that need to move things are expected to adopt self-driving vehicles before consumers, because transportation is a large expenditure for many businesses. Additionally, freight vehicles spend most of their time on highways with predictable conditions, which makes them ideally suited to autonomous solutions, many of while — like Tesla's AutoPilot — can already handle highway driving without human intervention.

One estimate finds that autonomous freight vehicles could lead to annual savings of $168 billion for the transport industry after eliminating the cost of labor and diesel fuel.

Baby steps — There are some caveats to Einride's announcement — the truck won't be hitting highways initially, and instead will be limited to controlled environments where self-driving is safest like company campuses.

At first, the Pod will be available to customers at two levels of autonomy: Level 1 and 2. The former means that the truck can transport freight within closed facilities on predetermined routes. Level 2 adds short distances on public roads. Levels 3 and 4, coming sometime in 2022 or later, add long-range driving in rural areas and on highways. All versions are available for pre-order today, but it's only the first two levels that are expected to ship in 2021.

Interestingly, the Pod will be available on a subscription basis. Customers put down a $10,000 deposit for the pre-order, and once the trucks are available they pay a monthly operation fee of $18,000 for Level 1, and $19,000 for Level 2. For that money, businesses get access to Einride's freight mobility platform to coordinate and operate the Pods, which are overseen by remote operators.

A paradigm shift — The remote operators here only take over as needed; the truck steers itself for the most part. It's the same way that Google's Waymo division has begun introducing its self-driving taxi service, and it's still a big deal even though a human is partially involved. Even under those conditions, one operator can monitor multiple vehicles at once.

It's possible to imagine a transitioning of traditional truck drivers going from the road to an office environment where they rotate in eight-hour shifts "driving" the trucks.

If Einride is able to eliminate or reduce the human capital costs that money could theoretically go towards developing shipping routes on roads where only autonomous vehicles are allowed to drive, introducing even more efficiencies.

A lot of jobs will be eliminated in the process of automating trucking, as happened to factory jobs with the introduction of automated machinery. But trucking is a notoriously unhealthy job, and getting people out of those and into more human-centric jobs would be a net positive in the long-run.