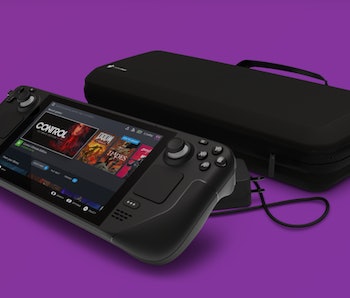 Over the weekend, Valve made certain to reassure everyone that, yes, it also heard Microsoft is gearing up to release Windows 11 OS later this fall and is planning accordingly for the company’s upcoming, potentially industry-altering handheld gaming console, the Steam Deck. We’re sure everyone involved is touched by your concern, though.

"There's work looking at [Trusted Platform Modules] just now," Valve Steam Deck designer, Greg Coomer, told PC Gamer recently in reference to one of Windows 11’s reportedly hefty hardware requirements. "We've focused so much on Windows 10, so far, that we haven't really gotten that far into it. Our expectation is that we can meet that."

It’s not just an in-house discussion, either. Coomer made sure to note that Valve is also in communication with AMD, who is supplying the Steam Deck’s Zen 2/RDNA 2 APU. "It's also a conversation that's going on with AMD to make sure that, at the BIOS level, we can accommodate that. So there's nothing to indicate to us yet that there'll be any issues with Windows 11."

You hear that, worrywarts? For those of you who insist on swapping over to Windows instead of Steam Deck’s native Proton/Steam OS combo (that Valve promises should be able to run just about anything you wanna throw at it), you should be a-okay by the time of Steam Deck’s release... sometime hopefully around Q2 of next year.

Not that you should want to make that switch — Of course, we’re not sure why anyone would want to go and ruin what appears to be a wondrous, long overdue “ugly baby” of a handheld gaming device. As PC Gamer explains, their first-hand look at an early version of the Steam Deck already impressed them, particularly the SteamOS 3.0 UI interface, going so far to describe it as “a console-like experience that you're going to struggle to emulate on a Windows 11 system.”

Still, having that option will be yet another huge draw to consumers, if only to increase the Steam Deck’s potential versatility. And with Windows 11’s rollout well underway by the time of the Steam Deck’s release, it’s definitely something Valve will need to make sure is airtight (ha!) before everyone starts plopping down cash on the handheld.