“The fact that they have the power to kick you out of the store and cut your revenue stream with no notice is nothing short of absurd." 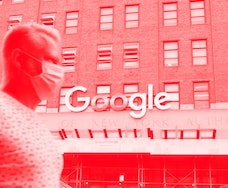 Blix, the developer of the BlueMail email app, says that Google abruptly kicked it off the Play Store on Friday, coincidentally just days after the company told news outlets that it was assisting Congressional investigators in this week's antitrust hearing against major tech companies.

“We have been developing for the Google Play Store for more than six years, but we woke up this morning to find ourselves kicked out with no notice,” Blix co-founder Ben Volach told The Washington Post.

Platform power — Congress, along with the FTC and DOJ, have been investigating the outsized power major tech companies wield over small businesses relying on their platforms. Apple in particular has been under scrutiny for charging 30 percent commissions on sales through its App Store, as well as for imposing arbitrary and capricious rules that developers say favor its own apps. iOS devices are locked down and users cannot download apps anywhere else.

Google's own Play Store hasn't received as much attention as Apple's because it's more lax about what apps are allowed in, and Android users can easily download apps from alternative stores. Still, the Play Store is preinstalled on most new Android phones and as such it's where most consumers find apps.

Interesting timing — Blix decided to work with antitrust investigators after suing Apple for antitrust violations. It says that Apple released a similar email app and then promptly removed BlueMail from the App Store. Google only told Blix that BlueMail was removed for copying another app. Blix says that Google's recently updated version of Gmail includes a chat feature that is similar to the functionality in BlueMail.

What makes Blix's argument of retaliation convincing is that we've seen it before: in an internal email released by Congress, we learn that the late Steve Jobs once ordered executives at Apple to "cut off" a developer who was speaking badly about the company to the press.

“The fact that they have the power to kick you out of the store and cut your revenue stream with no notice is nothing short of absurd," said Dan Volach, who co-founded Blix with his brother.

The last time regulators went after a tech company with similar monopoly control was when the United States sued Microsoft in the 1990s. At the time, the Department of Justice argued that Microsoft was unfairly benefiting its own apps by blocking PC manufacturers from installing their own software. The company also made it difficult to use alternative browsers like Netscape. Microsoft eventually settled and gave third party apps a lower barrier to entry.

Critics hope that Google and Apple will force to, at the very least, be more transparent in their decision making.