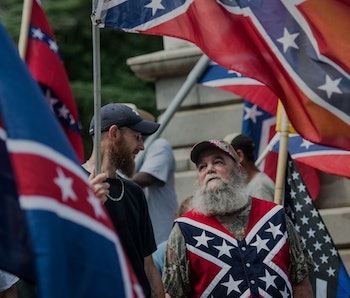 The Tech Transparency Project (TTP) released a study at the end of May outlining the ways white supremacist groups thrive on Facebook. Many hate groups with a Facebook presence have skirted moderation, but the more damning concern for the platform is how certain features fuel the growth of these organizations.

Facebook is well aware of the echo chambers its recommendation feature creates, but the study also found the auto-creation of Pages to be a massive culprit.

The study’s findings — TTP searched for the names of 221 organizations that the Southern Poverty Law Center (SPLC) and the Anti-Defamation League (ADL) designated as hate groups. Researchers found 153 Pages and four Groups connected to 113 hate groups, including ones Facebook claimed to have banned. The study was updated on June 7 to account for Facebook’s takedown of the majority of Pages uncovered, but all of the Groups were still active.

Most of the Pages TPP found were automatically generated when users listed a white supremacist or neo-Nazi organization as their employer. Whenever someone lists an employer that lacks a Page, Facebook automatically creates one. It pulls information like websites and descriptions to make the process easier for business owners, but even innocuous use cases often cause problems. The Council of Conservative Citizens, referenced in white supremacist terrorist Dylann Roof’s manifesto, was one of the auto-generated Pages.

The study also underscored the popular notion that Facebook’s recommendation feature creates a radicalization spiral. The platform recently halted this kind of promotion for race war Groups, but has not taken action on the content within them. Facebook has tried to push people away from these Groups by redirecting them to Life After Hate’s Page when they search for white supremacy terms, but TTP only experienced this with six percent of its searches.

Facebook doesn’t really know how to find Nazis — The combination of this study's release and the protests against the police systemically murdering Black people lit a small fire under Facebook. In the first week of June, the platform removed 137 of the 153 Pages TTP found as well as roughly 190 accounts tied to hate groups. Facebook was suddenly so aggressive on this front, it also swept up anti-racist skinheads who just want to listen to ska music.

It’s clear that the systems Facebook has in place to combat hate groups are at odds with core features. They lack the nuance to simply identify these organizations, let alone remove them.