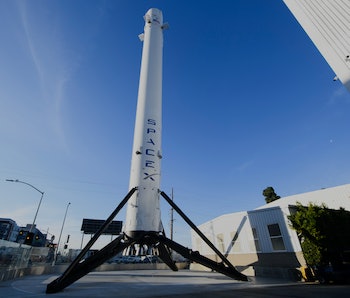 Yesterday evening, residents of the Pacific Northwest area were treated to a light show as debris from a SpaceX rocket fell back into the Earth’s atmosphere. The Falcon 9 rocket was launched on March 4 and was carrying a payload of 60 satellites for the company’s Starlink internet service.

Initially thought to be a meteor shower, the National Weather Service later posted on Twitter that the bright objects streaking the sky were in fact debris from a SpaceX rocket. According to Jonathan McDowell, an astronomer at Harvard University, the second stage of the Falcon 9 failed to make a deorbit burn; normally a rocket would point its tail towards the surface and fire an engine in order to slow it and allow for a controlled landing.

McDowell says the rocket debris is nothing to be worried about and would likely land in the Rockies near the Canadian border. The first stage of SpaceX’s Falcon rocket is reusable, which is the innovation that has made it a competitor in the space industry. The second stage is not reusable, however.

Satellite internet — Starlink is SpaceX's nascent service to provide high-speed internet to rural communities through the use of a constellation of satellites that blanket the sky in a near-Earth orbit. More than 1,000 of these satellites have already been sent into space, with plans to increase that number to 42,000 by 2027.

SpaceX’s plans have been criticized for contributing to space pollution with artificial light making it difficult for astronomers to study the cosmos from Earth. Researchers have begun to make the case that the FCC’s approval of Starlink satellites was made in violation of federal requirements.

Starlink has already onboarded more than 10,000 users in a limited beta, who pay a $499 upfront installation fee and $99 per month thereafter. Some customers have reported seeing speeds of more than 130Mbps down, and CEO Elon Musk says those speeds are set to double in the next year.

New business — The service is ideal in rural communities where broadband infrastructure on the ground is scant due to underinvestment, but Musk has said Starlink will never compete in urban areas that already have high-speed internet that can support dense populations.

Starlink is made possible thanks to SpaceX’s innovations in reusable rocketry that have made sending up payloads much more affordable. Starlink could also prove another way for SpaceX to make money, and the company has suggested it wants to provide its internet service to trucks and ships that may not otherwise have reliable access to communications.