"This is theft and exploitation." 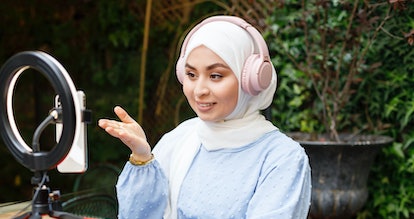 Fanhouse, an app that enables online creators to accept money from fans, is at risk of being removed from Apple’s App Store. In a Twitter thread on Wednesday, co-founder Jasmine Rice laid into Apple, saying its demand for 30 percent of revenue would come directly from small-time creators.

Launched eight months ago, Fanhouse has paid over 700 creators a total of more than $1 million. Rice herself started out as a prolific creator of adult-themed content on competing platform OnlyFans. She says she started Fanhouse as an alternative (though Fanhouse is PG-only) because she felt OnlyFans’s 20 percent take was too high. Fanhouse takes 10 percent of creators’ earnings and offers tools like the ability to host calls with followers.

But as an iOS app, Fanhouse is subject to Apple’s rules, which stipulate in most cases it’s owed a 30 percent cut of digital transactions.

Hurting creators — “I was the first creator on Fanhouse,” Rice said. “I grew up on food stamps, my family has over six figures of debt, and we live paycheck to paycheck. I single-handedly provide for my family, and I rely on my Fanhouse as a crucial revenue source to do so.”

Rice has made $20,000 to date on Fanhouse. “30% of that is $6,000. That’s months of rent. That’s my mom’s medical bills. That’s my brother’s tuition. When Apple insists on taking 30% of all transactions, they’re taking it from the pockets of people who need it most.”

Rice told Input that Fanhouse believed its app would be exempt from in-app fees because Apple has previously exempted similar services, like Patreon, which functions as a one-to-one payment service where one user is sending money to another. But Apple hasn’t budged on its demands. That could mean any time someone tips a creator or subscribes to their page on an iPhone, Fanhouse will have to hand over 20 percent more than it currently takes from creators.

Fanhouse has appealed to Apple, offering to turn over 30 percent of its 10 percent take. But the company hasn’t budged and has given Fanhouse until August to comply or face the same fate at Epic Games, which tried to circumvent Apple’s fees and was promptly removed from the App Store.

“Apple made $275 BILLION in revenue last year,” Rice continued. “$6,000 means nothing to Apple; they're fine with or without it. But for a lot of regular, working people, $6,000 is everything. We need it to survive. Apple is robbing people of their means of living, and they won't even feel it.

Growing antitrust pressure — Apple is facing increased antitrust scrutiny around the world over its treatment of independent developers in the App Store. Its 30 percent cut, the so-called “Apple Tax,” is at the center of its lawsuit with Epic Games, and of an EU action sparked by Spotify that could result in penalties as high as $27 billion.

While Apple has argued that it needs to charge the fee in order to cover its costs of maintaining a safe marketplace, critics say the rate is egregious because Apple can easily cover its costs selling pricey iPhones. It makes billions in annual profit, after all. And they point to exemptions for Patreon as well as Spotify and Netflix, which don’t pay to offer subscriptions through their apps, as evidence that Apple charges fees just because of its market power rather than out of necessity. iOS is a walled garden — only Apple can approve apps available on iPhones and iPads.

Consumers paying the price — The result is that prices for consumers may be artificially inflated by app makers to cover the fees. Tinder, for instance, charges higher prices on iOS versus on the web. That puts competitors at a disadvantage and would put Apple potentially in violation of antitrust regulations designed to protect consumers against inflated prices. But the plight of Fanhouse paints a more compelling narrative than Tinder or Spotify crying to regulators. You feel empathetic when the money is coming from small-time creators who may not be able to ask fans to pay more for their work.

“I don't know what to do except make this thread as a cry for help,” concluded Rice. “This is not about Fanhouse being upset about making less profit. Apple can take 30% of our profits. Fuck it, they can take 50% of our profits. But we will NOT let them take money from hardworking creators.”