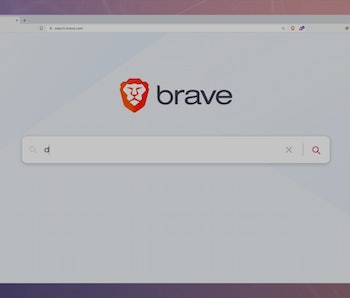 Brave is taking another jab at Google. The company, which makes the eponymous privacy-centric web browser, has now launched its own search engine. Brave Search is currently in beta and promises to not track or profile its users based on their queries.

Brave Search uses its own index for results, but when it doesn’t have enough results for a particular query, the search engine will revert to returning results from Bing. The search results page will indicate what percentage of results are coming from Brave’s index versus Bing. Over time as Brave crawls more of the web, it should rely less on third-party results.

Indexing aside, Brave Search looks to be a full-fledged search engine with features copied from Google, like knowledge cards that display relevant information directly on the results page.

Google’s lead — There already exist similar search engines that don’t track users, namely DuckDuckGo and Startpage. But Google’s search engine has a far greater lead indexing the world’s knowledge, and consequently, DuckDuckGo feels like a version of Google from three or four years ago. Even if you do want to move away from Google so that sensitive personal information isn’t floating around, doing so is hard because Google’s search quality is so high.

It’s estimated that, as of 2021, DuckDuckGo has a search engine market share of about 2.5 percent, while Google dominates at 70 percent.

Business model — Brave Search doesn’t feature any ads, and the company hasn’t indicated how it will make money from the product. On an FAQs page, it says it’s thinking through different business models.

Brave’s browser, meanwhile, blocks online advertisements by default, but the company sells advertisements that users can enable in exchange for receiving small amounts of its cryptocurrency called BAT.

Google has been moving to make its browser more privacy-friendly by blocking third-party tracking cookies, but the company itself still tracks users closely to support its advertising business. Critics say that because Google is reliant on user data to sell targeted advertisements, it will never go far enough to reign in its collection practices.