Boston Dynamics and its terrifying robot have a new home: Hyundai 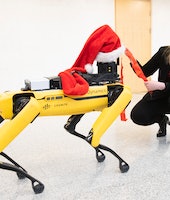 How much Hyundai shelled out for the robotics company

SoftBank continues to unload properties to rebound from a rough 2019 of bad decisions and the tumult of 2020. Hyundai has scooped up robotics firm Boston Dynamics from the Japanese investment fund for a cool $921 million, according to The Korea Economic Daily. Corporations have been playing hot potato with the firm — best known these days for its canine-like "Spot" robots — for years, but this acquisition suggests that the creepy robots are getting closer to mass marketability.

Spot finds a new home — After making robots for the Pentagon, Boston Dynamics was acquired by Google in 2013. Less than three years, a few Spot demos, and one re-org later, Google's parent Alphabet sold the company to SoftBank for $100 million, and the Japanese company pumped $37 million into it.

SoftBank’s bets on Uber and WeWork didn’t pan out, so it endeavored to sell $41 billion worth of assets this year. Between this extremely profitable sale and a troublingly successful IPO for DoorDash, however, things may be looking up for the company.

In its tenure at SoftBank, Boston Dynamics has clearly been shifting towards commercialization. It acquired vision sensing and deep learning startup Kinema to help develop new products, and earlier this year, Spot became available for purchase. At just shy of $75,000, the agile robot is clearly more of an enterprise purchase, but it’s moving into consumer-facing roles, from helping hospital workers to barking out social distancing guidelines.

Coming to a fire hydrant near you — The prospect of commercial applications has ratcheted up the company’s worth nearly tenfold in just a few years (it’s an even more exciting deal in Korean currency at $1 trillion won). While you probably just think about cars when you think about Hyundai, the company is betting big on the future. Hyundai’s Chairman Chung Euisun is positioning future automotive business at only half of the company’s focus with robotics taking up 20 percent and urban air mobility rounding out the plan.

When Bloomberg originally reported on talks between SoftBank and Hyundai, it noted Boston Dynamics still isn't profitable. Its focus on research and development is great at churning out viral videos to haunt our dreams, but only time will tell whether we'll embrace Spot in real life.