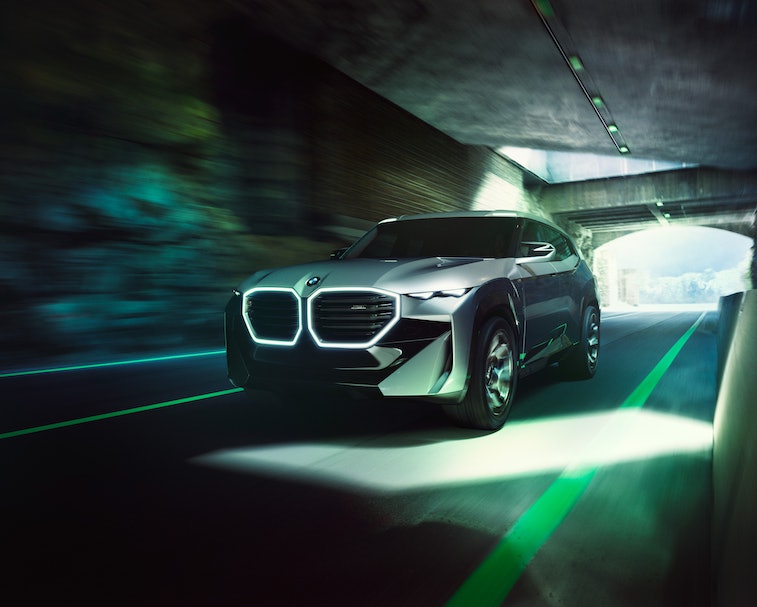 BMW just gave us another peek at its all-electric future with the unveiling of the XM concept vehicle, the first plug-in under the “M” performance umbrella. The high-powered hybrid crossover is a successor to the original M1, which was introduced in the late ‘70s.

BMW revealed the Concept XM at Miami’s Art Basel show Monday night, introducing it as the most powerful M car to ever go into series production. That production is planned to begin by the end of 2022 at BMW’s Group Plant Spartanburg in South Carolina.

Like the original M1, the XM is meant to break the mold for BMW — this time by bringing BMW’s highest performance standards to a sleek, powerful package that’s half-electric. The XM combines a V8 engine with a high-performance electric motor to produce a max output of 750 horsepower (550 kW) and a top torque of 737 foot-pounds.

This is BMW’s vision of the future: the same sporty power the brand first became known for, now with less gas.

Fancy front end — The XM is very much a showcase of the progress BMW has made in its electrification plans. It’s all about mining the past for a more progressive future — a tactic BMW has found success with in other vehicles.

The Concept XM also showcases BMW’s new front-end design direction. The headlights have been split into two individual modules, giving the XM a very distinct look from the front. BMW’s signature “kidney” grille makes a return here, though with some tweaks — each split grille is an elongated octagon — to give it an ultra-modern appearance.

A stepping stone — Like many other carmakers, BMW is now being forced to more fully reckon with how it will adapt to a future where filling up at the gas station is no longer the norm. The company recently announced that it will end production of internal combustion engines in its main Munich manufacturing plant by 2024 — though other facilities will continue to make them.

As a hybrid plug-in, the XM isn’t entirely divested of fossil fuels. BMW has yet to reveal the vehicle’s electric range or estimated gas mileage. Other all-electric vehicles, like the iX concept, won’t be able to hit the same levels of power the XM is capable of achieving.

The XM isn’t a direct solution to the climate havoc wreaked by combustion engines, but it’s a step in the direction BMW needs to travel to get there. It’s a hybrid vehicle that will appeal to BMW lovers — and that’s a win for the climate, too, even if only as a stepping stone toward an all-electric future.