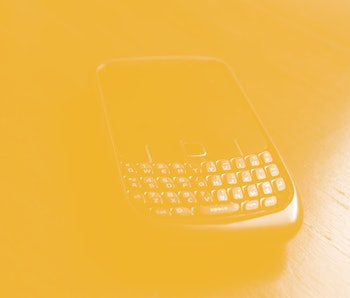 It’s not 2008 — but if you squint hard enough at the lineup of upcoming smartphones, you might just think it is. The latest addition is an Android-powered BlackBerry device with a physical keyboard, to be produced by a company called OnwardMobility. The Texas-based tech startup has licensed the BlackBerry brand name for a forthcoming 5G smartphone, planned for release sometime in the first half of 2021.

BlackBerry, once a well-respected household name in mobile phones, fell quickly out of public favor as Apple’s iPhone and Samsung’s Galaxy series took hold of the smartphone market and its unique selling propositions — physical keyboards and BlackBerry Messenger — were outshone by touchscreens and apps like iMessage and WhatsApp.

Recent BlackBerry phones have run Android and been manufactured by Chinese electronics company TCL. TCL's license expires at the end of August. Clearly OnwardMobility feels more optimistic about its chances than TCL dig, given the latter didn't renew.

Not much is known about the upcoming BlackBerry save for the fact that it will indeed be produced under the BlackBerry name. In all likelihood, the device will fail to live up to the expectations of this decade’s highly competitive smartphone market. But you can bet we’ll be watching it anyway.

What we do know — Information about the phone is essentially unavailable right now. OnwardMobility CEO Peter Franklin refused to offer specifics to The Register when prompted, save to mention that the phone will use a redesigned keyboard rather than recycling one from an older BlackBerry model. The phone will be manufactured by FIH Mobile, a subsidiary of Foxconn.

BlackBerry’s VP of Advanced Technology Labs, Sarah Tatsis, told The Register that the keyboard design hasn’t been finalized yet. She said also that it will “reflect the brand values from a keyboard typing experience and input experience.” Which is, you know, not really an answer at all. Also, no BlackBerry in the last decade has been able to recapture the imagination of consumers by way of a physical keyboard. It's not just that touchscreens are more flexible in terms of user interfaces, but physical keyboards tend to result in strange display dimensions that are awful for uses beyond typing emails, like playing games or consuming video.

Franklin says OnwardMobility’s other main focus with the device is preserving the security and usability that consumers came to expect from BlackBerry. This equates, he says, to being a little less expensive than a flagship phone with similar specs you’d want in a day-to-day phone. With the mid-range market pretty crowded, that's a tough proposition, too.

BlackBerry’s been buried so many times now — This is not the first time a third-party manufacturer has attempted to resurrect the BlackBerry name. Actually, most of BlackBerry’s business in the last decade has been resurrection attempts.

BlackBerry tried a reboot in 2013 with its BlackBerry 10 devices. By 2016, the brand had essentially folded — just a year after switching to the Android operating system — which is when TCL stepped in. A number of BlackBerry devices have also been released in India since, and the company has continued to offer its software services to a range of companies, but making phones wasn't something we expected to see it do again.

Nostalgia makes for bad devices — We’ll reserve judgment until the new BlackBerry’s actual release. Still, though, consumers should be wary of any device that centers its operations on nostalgia. Nokia has had limited success using a similar approach, and with every passing year, the number of people with fond memories of BlackBerry's physical keyboards dwindles.

Similarly, Motorola’s new Razr initially managed to generate plenty of hype thanks to early-aughts-based nostalgia, but it ultimately failed to deliver on it.

Perhaps our worries are unfounded. OnwardMobility could do a stand-up job with this reboot and the new BlackBerry could usher in fresh space in the phone market for keyboard-centric devices. But we're not betting on it. The world of mobile has changed too much. And we've been hurt too many times by brands seeking to exploit our yearning for simpler times.