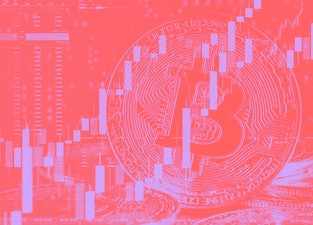 The market cap of bitcoin on Friday afternoon.

Bitcoin pushed past a market cap of $1 trillion on Friday as the price of a coin reached $56,000. The achievement is a key milestone towards the currency being recognized as a mainstream investment asset.

Broad acceptance of bitcoin has been a struggle for years, in part because of its high volatility. The currency has regularly surged to new heights only to crash back down just as quickly. For wealth managers and pension funds, using someone else's money to buy bitcoin has been viewed as too high-risk.

Some still worry the record highs won't last, as more recent buyers of bitcoin may not be serious "HODLers" but rather speculators using their stimulus checks to gamble. Even though the value of any asset is essentially made up, they might still not view bitcoin as a "real" investment like gold, and could be apt to take profits off the table now that bitcoin has hit the symbolic $1 trillion mark.

Ethereum has been on a similar rise recently having hit $2,000 per "ether" before returning some gains.

Tailwinds — There are various secular trends working in bitcoin's favor, however. Besides the risk of a weakening U.S. dollar caused by further stimulus, recent endorsements by Tesla and Mastercard and the introduction of stock-traded bitcoin funds have helped to lend the cryptocurrency new credibility.

And in an economic recession when the S&P 500 has done better than ever, bitcoin has come to represent not just an investment vehicle but a populist movement.

Individuals rallied behind the stock of GameStop, recognizing that Wall Street investors make their money not through providing a social good, but by playing the stock market and pumping up companies on speculation that stocks will continue to rise. The rally was short-lived, however, and after a rapid rise in GameStop's stock, the stock suddenly collapsed when Robinhood cut off buying and only allowed people to sell.

The fiasco was somewhat of an anomaly, but it infuriated many who felt it confirmed their belief that the game is rigged against regular people. Bitcoin is increasingly seen as an alternative to the stock market that for so long has reinforced the wealth of a few who have money and know-how to play the game. Pumping up bitcoin is really no different than speculating on gold in the stock market, but no authority can cut off crypto trades.

Not a currency — But if bitcoin is becoming a true investment vehicle, a currency it still isn't. The original vision for bitcoin was as a decentralized currency that cannot be controlled by any central authority. It still isn't being used to buy goods, though, at least not yet. Bitcoin is a wildly inefficient method of transacting and today it costs a whopping $23 on average to process every transaction, due to the large amount of computing power necessary to verify transactions. And outside of authoritarian regimes, centralized currency control actually works well in most countries. After all, the U.S. government wouldn't be able to stimulate the economy with bitcoin checks in the way it's been printing dollars.

But as a store of wealth, bitcoin may be here to stay.