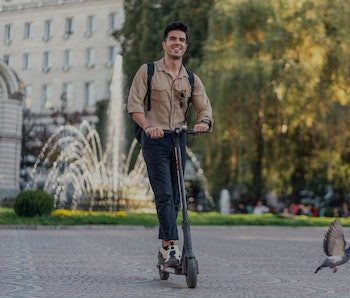 Bird is expanding a safety measure to further prevent nasty collisions caused by its scooters. The shared mobility company — Bird now offers bikes, too — is launching what it calls “Community Safety Zones,” or geo-fenced areas of high pedestrian activity where its scooters will automatically slow down.

Slow zone — Geo-fencing is already used by scooter companies to block their vehicles from being parked or ridden in restricted areas, like areas of high tourist activity where local officials don’t want scooters running into people or blocking sidewalks. Bird is simply expanding that to more areas, starting with schools.

In these areas, Bird will automatically reduce a scooter’s maximum speed to 8 mph down from 15 mph. It will also trigger an in-app message explaining the deceleration. Bird says the app will clearly denote low-speed areas on its in-app service map so riders can plan ahead.

Bird recently implemented another safety feature called Safe Start that tests late-night riders and aims to prevent those under the influence from renting a scooter.

PR fix — These types of safety features have come after years of highly publicized crashes on the rentable scooters, which flooded the streets of cities around the globe and didn’t expect riders to complete any sort of training before taking off on the motor-powered vehicles. There were, at one time, so many crashes that it risked cities stepping in and banning the services altogether.

The new slow zones are just like any other that’s enforced for cars on city streets, but Bird says that its ability to automatically enforce the requirement is a key benefit of its service. “Unlike cars and other heavy road vehicles where speeds can exceed 100 mph and speed limits are dependent on individual drivers, scooters can be — and often are — remotely programmed to automatically slow down or even stop in designated areas throughout a city.”

Bird and competitors like Lime launched years ago to much hype, but have been quieter since the pandemic began and people stopped going out as much. The startups were forced to cut costs down — Bird cut 30 percent of its workforce in March 2020 — and continue developing more durable scooters, as the early iterations of their vehicles wore down before they broke even. But scooters that can be rented in an instant have a purpose in cities trying to alleviate congestion and pollution, so they’re probably going to be a fixture of cities for years to come.