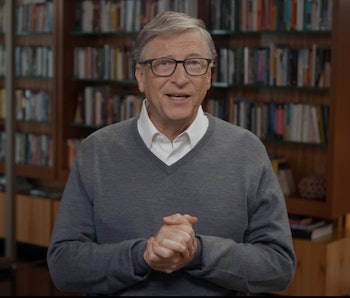 Bill Gates threw some shade at Tesla CEO Elon Musk in an interview with Bloomberg yesterday. In it, he praised Tesla's cars but said that the problem it's solving is one far easier to address than other areas of the climate change battle.

The two founders have traded attacks at one another in recent months. Musk tweeted once that his conversations with Gates have been "underwhelming," while Gates has previously said that Musk's "positioning is to maintain a high level of outrageous comments."

It's the supply chain, stupid — Gates argued in his interview that emissions from the world's industrial economy is a much tougher problem to solve than electrifying vehicles. Progress there has been "very, very small." He isn't wrong. Consider, after all, that producing a Tesla requires mining for rare Earth metals. Much of the electricity used to power the cars is still generated from fossil fuels. These supply chain issues are harder to solve than selling luxury cars to mostly upper-class customers.

In his defense, Musk is going in the right direction. Teslas don't belch harmful emissions and can be powered by totally clean energy. The company has a solar division and its Powerwall energy storage product that are intended to free customers from the grid altogether. And it has been making some efforts to clean up the supply chain for its cars, such as by using recycled cobalt in its batteries and working towards increasing their overall lifespan.

On other issues, Musk isn't so admirable. Such as when he's made reckless comments dismissing the severity of coronavirus without evidence, or when he reopened his Fremont, California factory and forced workers back despite local prohibitions. Gates on the other hand has been funding efforts to develop a vaccine.

Reputational cleansing — Gates isn't squeaky clean either. His reputation was badly damaged by a '90s antitrust case in which the Department of Justice claimed that Microsoft was unfairly harming competition by making it difficult to install third-party software on Windows. The company eventually settled but Gates stepped down as CEO shortly thereafter and used his wealth gained from Microsoft to repair his brand through years of philanthropy.

But one thing that Gates definitely has over Musk is this impressive chair jump that he showed off during a 1994 interview with CBS: