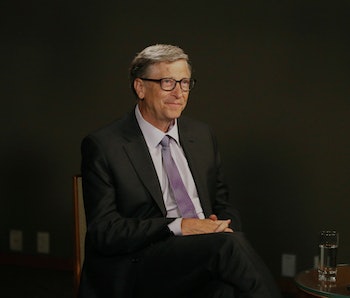 Microsoft co-founder Bill Gates has stepped down from his company's board of directors in order to dedicate more time to philanthropic endeavors, Microsoft announced today. While Gates has long since left his post as CEO of the company he created in 1975, exiting the board means he no longer holds any formal obligations at Microsoft. The company says Gates will remain a technical adviser to CEO Satya Nadella, though if we're being honest that title really doesn't mean much in practice. He's gone.

Gates also left the board of Berkshire Hathaway today, suggesting there was no acrimony towards Microsoft in making the decision. He's being replaced at Berkshire by former AMEX CEO Kenneth Chenault, who is himself stepping down from his board seat at Facebook. It's a whole lot of Friday news dumps.

Change has been brewing — Gates has for years been primarily focused on efforts at the Bill & Melinda Gates Foundation, which contributes his amassed wealth to initiatives with positive global impact, like a project to develop affordable filtration systems for bringing clean water to the developing world. The foundation has also made investments in companies including Impossible Foods, which is developing plant-based meat alternatives intended to cut down on the harmful CO2 emissions produced by cows.

"It’s been a tremendous honor and privilege to have worked with and learned from Bill over the years. Bill founded our company with a belief in the democratizing force of software and a passion to solve society’s most pressing challenges. And Microsoft and the world are better for it," said Microsoft CEO Satya Nadella.

Microsoft v. United States — Besides changing the world by creating Windows, Gates is probably most famous for the brutal antitrust battle the United States waged against Microsoft under his reign. The government accused the company of maintaining an unfair monopoly over the internet by bundling Internet Explorer with Windows and making it difficult to install alternatives like Netscape.

Public perception of the company, and of Gates himself, was badly bruised in the fight. Some have argued that Gates's pivot to philanthropy was a cynical move to wash his reputation of Microsoft's cutthroat tactics in the same way that other ruthless leaders have before him. It's a small price to pay for achieving world dominance.

Still, it's hard to knock charity work on its face, and Gates has come out of late saying publicly that he believes people who reach his insane level of wealth should be taxed a lot more than they are today. Even accounting for the billions that his foundation gives away annually, Gates still has a net worth sitting at over $100 billion.

"The board has benefited from Bill’s leadership and vision. And Microsoft will continue to benefit from Bill’s ongoing technical passion and advice to drive our products and services forward. I am grateful for Bill’s friendship and look forward to continuing to work alongside him to realize our mission to empower every person and every organization on the planet to achieve more," added Nadella.