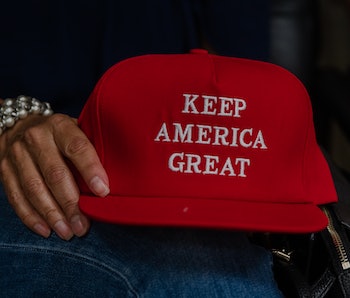 President Trump's bid for the 2020 presidency is not going too well amid a wrecked economy and continued civil unrest. And to add on top of that, his campaign team apparently didn't have enough foresight to buy up relevant domains. "Keep America Great" is Trump's new slogan suggesting that the U.S. has improved under his watch (it hasn't), but it appears that Joe Biden swooped in and grabbed keepamericagreat.com first.

Clever — If you visit the site you'll see a list of promises that Trump has broken during his presidency, including that the country would have its greatest economy in history. Clicking each promise toggles between what he promised and what's actually happened.

There's no coherent strategy — Some people continue to think that Trump has super-villain level competence, but the truth is that every decision he makes is pretty haphazard and based on pandering to his base. Threatening to ban TikTok, inciting violence against protestors in liberal cities — it's all lurching from one thing to the next in whatever way will "own the libs." Trump is not thinking three steps ahead at all times. Biden buying up the domain is probably why he stopped using "Keep America Great" lately.

The short-sightedness of his apparently great director of social media, Dan Scavino, failing to buy domains is incredible. But Trump is willing to do just about anything to stay in power, including openly admitting that he blocked funding the USPS in order to slow mail-in ballots because they increase turn-out. The two-party system means that a lot of people are going to root for their team no matter the cost.

Still, Biden managed to sort of, you might say, own the conservatives on this one.