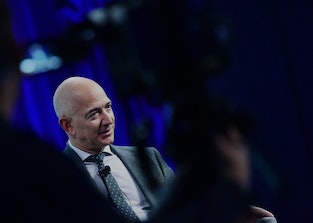 The stock prices of all the major tech companies have climbed wildly this year, with major executives including Jeff Bezos and Elon Musk seeing their wealths increase by tens of billions in 2020. The converse is also true, that their huge concentrations of wealth mean even a small fall in the stock price equates to billions lost. Yesterday, Bezos, Musk, Zuckerberg, and Gates saw their collective net worths fall by $25 billion after the S&P 500 dipped by 5 percent.

Short term vs long term — That sounds like a lot, and in absolute terms it is. But take a look at Musk's wealth and you'll feel less sympathetic. His net worth is estimated to be $96.2 billion — at a time when the world is being ravaged by a global health crisis, his wealth has skyrocketed by a whopping $68 billion this year. He lost $9 billion yesterday after Tesla's stock slipped 9 percent, but it's also not uncommon to see him gain the same amount in a day. At this scale of wealth, the numbers become sort of meaningless in the short-term. If you look at the wealth gains of these execs over a longer time horizon, they've all done very well.

Let's not forget that 881,000 new people filed for unemployment last week, with overall unemployment at 9.1 percent. The Trump administration earlier this week had to announce an extension of the eviction moratorium to prevent more people from being pushed onto the streets.

The markets are out of touch — Some have attributed recent tech gains to bored individuals stuck at home and looking to cash in on these companies and how they've benefited from stay-at-home orders. Everyone's buying goods on Amazon, for instance. However, it was also reported today that over the past month alone, SoftBank has been plowing billions into tech stocks in order to capitalize on the strong market, further reinforcing the rally. The purchases by SoftBank surely signaled confidence to others that they should buy — but then SoftBank unloaded its positions once the prices got high enough; a classic pump-and-dump.

This is all to say you shouldn't think too hard about these daily fluctuations in the net worths of tech execs — they're worth so much money, and there's so much noise in the stock market, that it's not catastrophic for any them. All it signals is that they probably have too much money that could be going to important societal needs.