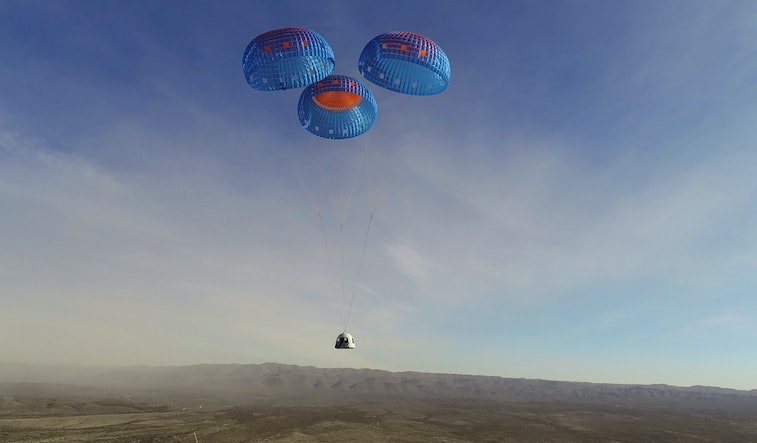 On Thursday, Jeff Bezos’ Blue Origin completed a successful flight test in the upgraded New Shepard vessel. The crew capsule received a mix of safety and comfort-related updates for its 14th flight (dubbed "NS-14") which lasted for about 10 minutes. NBC News reports that the spacecraft could fly with a full crew as early as April.

Major Tom to ground control — The NS-14 added communications features to each of the six seats in the capsule, which were also new, including a crew alert system replete with the space equivalent of an airline safety video. Passengers in each seat can also maintain communication with Mission Control thanks to microphones and push-to-talk buttons.

Cooling and humidity control systems were also introduced to prevent the windows from fogging and to scrub carbon dioxide from the interior. Some sound-proofing also quelled some of the ambient noise in the capsule. Finally, this is meant to be a fun experience after all, so the booster rotated at 2 to 3 degrees each second during ascent to provide 360 views from those now fog-free windows.

Sources told NBC News that test flight NS-15 is expected to occur in six weeks with a crewed flight taking place six weeks after that (or roughly in early April). Blue Origin has a lofty goal of ultimately sending people to space on a regular six weekly schedule.

Billionaires in space — While Elon Musk's SpaceX has definitely pulled ahead in the billionaire space race, Bezos and Virgin Orbit’s Richard Branson are pushing ahead with their own plans. Virgin Orbit has literally struggled to get off the ground, but its most recent launch reschedule for January 17 could re-cement its place in the burgeoning industry.

Like his billionaire space-curious peers, Bezos has his own ideas for space travel, preferring for the great unknown to become a landfill for wasteful Earth. The introduction of private space travel at a relatively nascent stage of the process affords a handful of elites to potentially influence how we treat the rest of the solar system. But hey, the booster spins, so that’s cool.