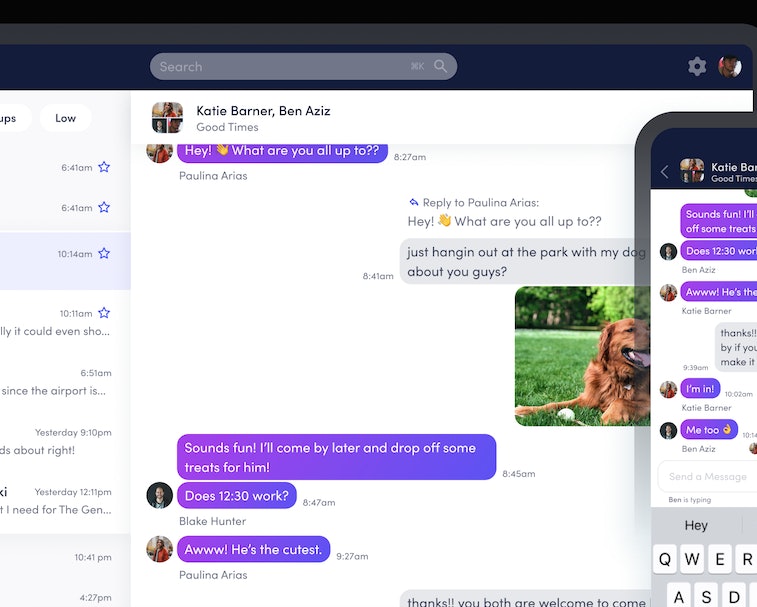 There's a new messaging aggregator app launching soon that enables users to chat with their iMessage friends... even if they, themselves, are Android users. Yes, it's real, and it's made by Eric Migicovsky, the creator of the much-beloved Pebble smartwatch. Which lends it further legimacy.

Called Beeper, the universal messaging client combines 15 different chat platforms — from Discord to WhatsApp and Slack — into one, so you can respond to all your friends and family from one app. It takes advantage of an open-source messaging protocol called Matrix, connecting Beeper to other chat networks through "bridges," basically hacks for communicating with any chat platform.

How it works — The most interesting support in Beeper is for, obviously, iMessage. Because iMessage keeps people buying new iPhones and Macs, there's little chance that Apple will make the client available outside iOS and macOS. There's no developer API for creating alternative clients and, for privacy reasons, all messages are end-to-end encrypted, meaning only the sender and receiver can view messages locally on their devices.

In order to get at those messages, Beeper had to do something pretty janky. The app costs $10 per month, and Beeper says it will mail users a jailbroken iPhone 4S for sending and receiving messages. With some unauthorized bridging software installed, messages are passed between the 4S and Beeper's servers. Voilà, you can leave the 4S at home and send iMessages from your Galaxy S21. And you're upcycling old iPhones at the same time.

Beeper also works if you just have a Mac at home that's connected to the internet all the time.

In case you're worried about security, the company says that the Matrix protocol is end-to-end encrypted. Beeper's bridge for connecting iMessage to Beeper itself is also secure and open-source, so anyone can look at the code and scrutinize its security.

Messaging ecosystem — Beeper at its core is an attempt to reimagine instant messaging and make it more like email. That protocol is an open standard, and anyone can email effortlessly with anyone else. Gmail's servers can communicate with Yahoo's because they speak the same language, and users can read their messages from any client they want. That has allowed for innovative new apps to spring up that rethink the email experience, like Superhuman, Hey, and Google's now-defunct Inbox.

Instant messaging, on the other hand, locks messages inside closed ecosystems, be it WhatsApp or iMessage. They aren't interoperable, for two main reasons. One, because locking users in to one app helps its owners make money. But there are also some legitimate security concerns, as email itself isn't end-to-end encrypted. Every email provider independently needs to choose to enable high-level security. But, with one flip of a switch, WhatsApp was able to immediately make all of its user's messages encrypted.

The Matrix protocol introduces that type of encryption as a standard, and Beeper hopes to show what an open, secure messaging experience could look like. One where you're not constantly trying to remember which app you spoke to your friend in last. We can't wait to try it.