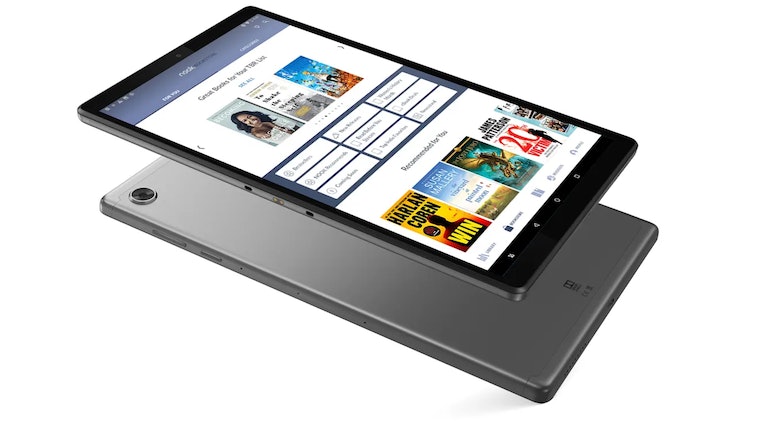 You would be forgiven for forgetting that Barnes & Noble still exists, or that it owns an even more forgotten brand of e-readers called Nook. The brand is an overlooked competitor to Kindle and even Kobo, but it still technically exists. And now Nook is releasing a new product, a 10-inch tablet developed by Lenovo.

Pretty basic — This product obviously isn’t an e-reader in the traditional sense. It’s a standard Android tablet, but with a custom Barnes & Noble UI layered on top that’s designed around reading e-books. There’s still access the Google Play Store, so you don’t have to buy your books from Barnes & Noble either; you can download the Kindle app if you want.

In terms of specs, the tablet will feature a 10-inch HD IPS touchscreen surrounded by a full metal body with an “85 percent screen-to-body ratio.” It’s powered by an octa-core processor, and includes 32GB of storage as well as a microSD card slot. Battery life is slated at 10 hours for web browsing. Other specs include Bluetooth connectivity, an FM radio, and front and rear cameras.

Value segment — Is there anything truly groundbreaking about this tablet? Not really. Because of the backlight, it doesn’t even seem like avid e-readers would actually want to use this over an e-ink product that’s easier on the eyes. But at $130, it seems like this is a pretty good tablet for the value-conscious consumer. Maybe if you want a tablet and you’re fine reading books on that type of screen, then this could be for you. It could also be useful for reading comics digitally. Just a couple of years ago a similar product would have cost a lot more, but today’s announcement has dropped without any fanfare.

Another good market for this might be parents buying a tablet for their children. Amazon already sells an affordable line of Fire tablets aimed at that market, but maybe you reasonably don’t want to support that company. A lot of people can get behind supporting a competitor.

Barnes & Noble says the tablet will be available in-stores and online starting in April. “This new NOOK is great for reading, playing games, or watching video,” says the company in a press release. “It will hit stores just in time for spring and it makes a wonderful gift for Mother’s Day, Father’s Day or graduations.”