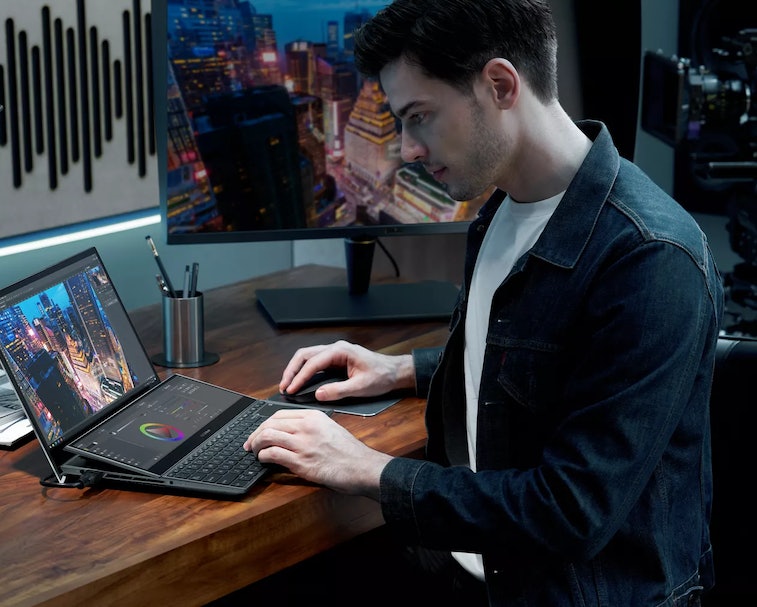 Asus has used CES 2021 to announce a refresher of its dual-screen laptop line with the new ZenBook Duo 14 and the Pro Duo 15. The latter 15-inch model is available starting in April, but if you want the smaller 14-inch variant you can pre-order it now with shipments beginning January 22.

The idea with the ZenBook Duo is that you have your regular screen as well as a smaller, secondary screen that's built into the top half of the keyboard. Like a giant Touch Bar, but on the ZenBook's secondary screen you can run any app, or extend your primary screen.

Spec bump — Both models of ZenBook Duo have been around since last year, and the biggest change is probably that the secondary display now hinges upward, rather than remaining flat on the keyboard. You won't have to crane your neck down to look at it so much, but we have to wonder how it will handle debris getting behind it.

Since the secondary screen is larger than Apple's Touch Bar (but still not very big), you'll presumably use it to display something like a scrolling Twitter feed, or maybe Slack chats, while you use the primary one to get shit done.

Ergonomic nightmare — Unfortunately, in practice, it might annoy you more than anything. Looking at the picture above you can see there's nowhere to rest your wrists. Reviewers have said the design is just plain uncomfortable to use. And understandably that second display makes for poor battery life; last year's generation only got maybe three hours of life on a full charge.

In defense of the ZenBook, it might be useful for some specific productivity work like video editing where you could use the secondary display to show a video timeline — Adobe, blessedly, has built native support in its apps to take advantage of the ZenBook Duo's second screen. Programmers could display a code editor on the primary screen and command line logs on the bottom.

Still, you are trading limited screen space for a heavy compromise on ergonomics — creating a completely new problem in need of a solution. Maybe that's fine with you if the screen space is more important, but for the rest of us, we'll stick to single-display laptops, thank you very much.