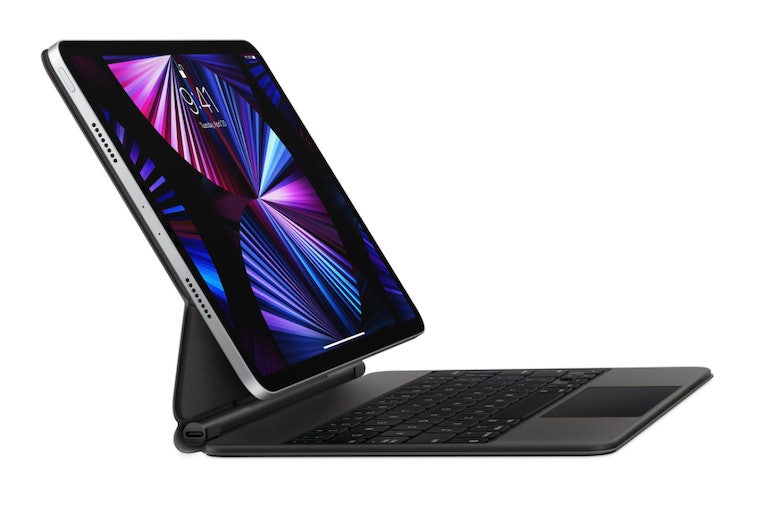 Bad news for early backers of Apple’s Magic Keyboard folio case: the current iteration is already obsolete for the company’s latest iPad Pro upgrade. As first reported by the French outlet, Generation — and since reiterated by other outlets — the new 12.9-inch iPad Pro announced this week won’t support the older, $349 Magic Keyboards, so if you’re looking to level up your tablet game, it’s gonna take that much larger a chunk out of your wallet.

Hey, it’s not all disingenuous Tech Giant greed: if you need some cheering up... well, at least the newest iPad Pro is the best Apple’s had to offer in years. But we do wish Apple would work a little harder at ensuring the longevity of its never-cheap accessories, especially considering how pricey its hardware is to start with.

The devil is in the details — The reason behind the sudden obsolescence can almost certainly be laid solely upon Apple’s mini-LED screen. As we noted earlier this week, the new 12.9-inch iPad Pro includes 10,000 LEDs within its screens to make everything “brighter, increase contrast, improve highlights, and enhance colors so they’re more vibrant.” This is particularly useful for nitty-gritty design work and watching HDR content, but it comes at a cost — aside from the monetary aspect, that is.

It’s rumored to fit those 10,000 mini-LEDs into the frame, the new 12.9-inch iPad Pro had to size up to 6.4mm thick, which is 0.5mm more than last year’s 5.9mm thick model. That doesn’t sound like a big difference, but it is enough to outgrow the older Magic Keyboard accessories.

Silver (or Space Gray) linings — It’s definitely worth noting here that the older Magic Keyboard models are still compatible with Apple’s newer 11-inch iPad Pros since, without the mini-LED upgrade, they have remained the same size all around. Additionally, the newer Magic Keyboard models are at least backward compatible with older iPad Pros, so there’s that to soften the new, $349 blow... but that’s no use if you already own the old one and plan to update your tablet.

Is anyone really surprised? — Although particularly rude to Apple’s most loyal followers, it’s hard to be shocked. This is, after all, the company that bequeathed oh-so-many dongles unto the world, and thought the $550 AirPods Max was a reasonable product to release during a pandemic. It’s also the same company that refuses to adopt USB-C for its phones, despite the rest of the smartphone world agreeing that’s the way to go.

The Magic Keyboard is decent, but there are still plenty of really solid keyboard cases for iPads out there. It’s going to be hard to win over anyone on the fence when your flagship tablet add-on is only functional for a couple years at a time. Hopefully, we won’t see a similar situation for whatever iPad Pro updates are in store circa 2023, but we aren’t holding our breath either. We’ve learned by now just how foolish that would be.