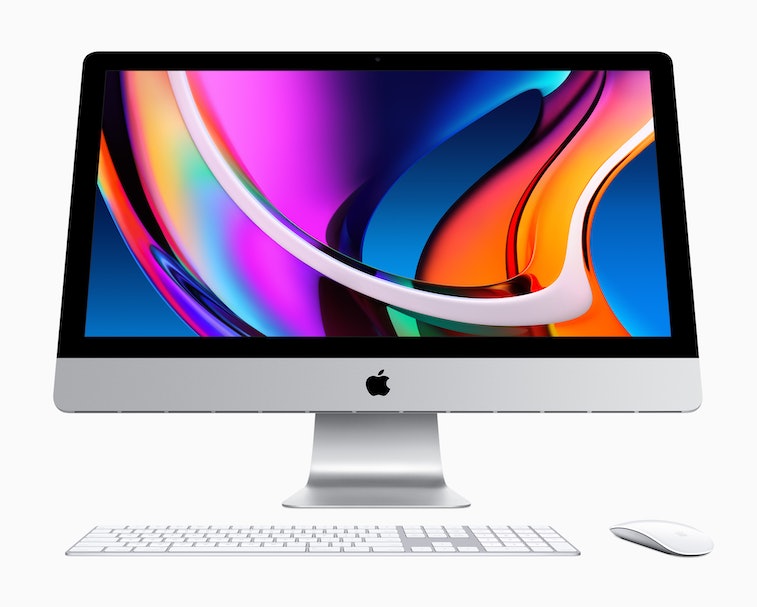 Apple has updated its top-of-the-line 27-inch iMac with new 10th-generation Intel processors and a 1080p camera, among other improvements. Apple's still saddles even its latest MacBook Pro laptops with 720p camera so, hopefully, this signals the end of that tomfoolery, especially as many of us are now spending more time using our webcams that ever before.

If you max out the new 27-inch iMac with a 10-core Intel Core i9 processor and 128GB of RAM you can ramp the cost of the all-in-one computer up to nearly $9,000, though the starting price for the base model is a much less terrifying $1,799. It's available to order from Apple starting today.

Apple is also making SSD storage standard across the whole line — including the 21.5-inch iMac — providing faster read and write speeds. The 27-inch model can be maxed out at 8TB of SSD storage while the 21.5-inch can reach 1TB, though the smaller iMac still supports Fusion Drives that offer the speeds of SSD and the cost advantage of mechanical drives. The T2 security chip is being added across the line, which encrypts all data on the SSD and checks during bootup that the computer hasn't been tampered with.

Those bezels though – Unfortunately the updated iMac isn't getting an iPad Pro-like design as rumored, so you're stuck with those thicc bezels around the screen for now. It was also reported that Apple was considering upgrading the camera with a TrueDepth sensor to enable Face ID unlocks, and that didn't happen. The 5K Retina display on the 27-inch model is at least getting True Tone which adjusts the colors based on your surroundings. You can also get the display with the same matte finish to block out glare offered on the company's Pro Display XDR, though that'll cost another $500.

It's unfortunate that Apple isn't bringing some of these improvements like True Tone and the 1080p camera to the 21.5-inch model. Then again, that more affordable desktop computer is geared more towards teens and students who don't necessarily need the best of the best. Apple likely considered what it could remove and still be able to sell the computer to this demographic. Options like matte glass and 10-cores are aimed more at deeper-pocketed enthusiasts or working professionals who aren't as price sensitive. The 1080p camera might not even be a super big deal if you're just using it for video conferencing, but the faster SSD should be noticeable if you're editing piles of video or stacks of RAW images.

Wait or buy now? – Apple intends to release its first Macs later this year that ditch Intel processor in favor of Apple Silicon, ARM-based chips. The transition will allow Apple to release more frequent hardware updates with faster chips based on its own timeline, and the computers are supposed to run iOS apps without any modifications.

You might want to wait for those computers, but on the flip side, Intel Macs are guaranteed to work for years to come. We don't know how smooth the transition to Apple Silicon will be, or how well Rosetta2 will work for emulating existing apps built for Intel-based computers. Apple believes a successful transition will take two years. If you need something that's fast and reliable right now, you can't go wrong with this new iMac.