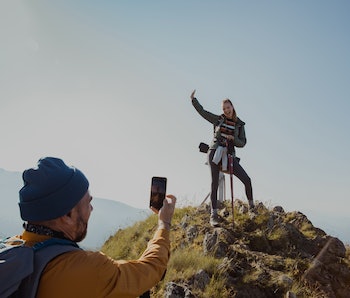 Apple's iPhone is known for offering one of the best cameras you can get on a smartphone, especially now that the company's embraced including wide-angle cameras in its top models. But one of the areas it falls behind rivals is in terms of zoom. Samsung's Galaxy S20 Ultra and a range of phones from Huawei and Oppo now offer incredible zoom range thanks to "periscope cameras" that build multiple lens elements sideways into a phone and throw in two 45-degree mirrors or prisms, so they're able to build-in the phone equivalent of a telephoto lens without the bulk. Now it looks like Apple's considering the tech for its own devices.

Multiple outlets, including 9to5Mac, AppleInsider, MacRumors, and The Verge report the 2022 iPhone lineup could feature a periscope telephoto camera. This is based on a research note from the TF Securities analyst Ming-chi Kuo.

A little bit about periscope cameras — Normally, when you think of a periscope, you probably imagine a submarine somewhere at sea with only a tiny lens roving above the waves, keeping a lookout for the enemy. The same tech applies here. Albeit without the threat of foreign military. By modeling smartphone cameras on the underlying physics that make a periscope work it's possible to keep building slim phones while giving them extreme zoom lenses.

The reason that matters is that, without optical elements like lenses, zoom has to be digital. And that amounts to little more than zooming in on the available pixels, and soon results in blurry or grainy images. Optical zoom, meanwhile, makes it possible to zoom while maintaining comparable image quality to that which you'd get from a regular lens.

Add software and the results can be staggering — Of course, that's not to say digital enhancement isn't valuable. For it's first few generations of Pixel phones (and it's budget ones today) Google's managed with a single rear camera because its software for processing the data captured by the image sensor is so good. That same software is what enables incredibly detailed low-light photographs via its Night Sight feature.

But combine cutting edge imaging software with periscope lenses and there's the potential for DSLR-level image quality and composition flexibility.

Trailing, as usual — Apple's slow to the periscope game, but then, that's Apple's way. It waits until the creases in new technology have been ironed out and then implements them if it thinks they add real value. It was late to wide-angle cameras. It was late to wireless charging. It's really late to home screen widgets. But it'll argue that it's done them better than other phone makers, so it was worth the wait. You can bet it'll make the same arguments about periscope cameras if it does, indeed, bring them to an iPhone in 2022.