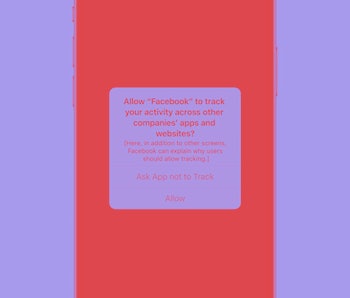 The launch of iOS 14.5 includes a number of notable updates and alterations for iPhone, iPad, and Mac users, but undoubtedly one of the most consequential is its App Tracking Transparency option, which Apple touts as a way for consumers to have more of a say on how their personal data is utilized by third-party developers. That said, it remains to be seen just how effective the new toggling tool will be at preventing digital ad firms and companies from utilizing your info. As the NYT explained earlier today, App Tracking Transparency’s debut “could simply push developers and ad-technology firms to find loopholes so they can continue tracking people in different ways.”

Unfortunately, ad companies already use a diverse array of methods to keep tabs on consumers’ purchasing habits and interests, so it’s more likely iOS 14.5’s new feature will blunt data sharing more than blocking it entirely... but hey, Siri can play music through Spotify on command now, so that’s nice.

Simple to enable, more complex to enforce — Beginning today, any app that employs tracking software will need to include the App Tracking Transparency alert within their next update. Once included, users will see a screen saying “Allow [App Name] to track your activity across other companies’ apps and websites?” upon first opening the app, along with the options of “Ask App Not to Track,” or “Allow.” If enabled, the app is barred from accessing your unique Apple device identifier. That’s the easier part. It will also send a message to the app’s owners requesting they not share your information to anyone, and this is where things get far murkier.

Their ‘fingerprints’ are all over your devices — As noted by the NYT, app developers and ad companies don’t simply rely on Apple device identifiers, but instead often look at a number of other data points via something called fingerprinting, which “involves looking at seemingly innocuous characteristics of your device — like the screen resolution, operating system version and model — and combining them to determine your identity and track you across different apps.” An Apple device identifier might be one of the easiest ways to pinpoint your info and preferences, but fingerprinting ensures a bunch of crafty ways for third parties to continue doing so.

All that said, it’s still a big step forward for Apple users. By explicitly informing companies that you don’t want your info aggregated, it makes it easier for Apple to enforce punitive measures like banning them from the App Store if they continue doing so. Although that sounds like it could get pretty thorny, at least it’s one of the few instances the App Store could be put to good use by Tim Cook and company.