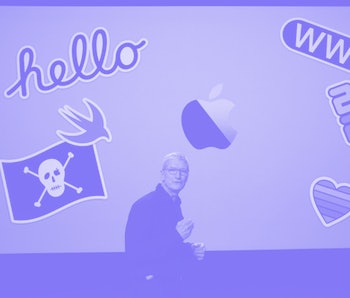 For once, Apple has addressed the elephant in the room head-on. One of them, at least. CEO Tim Cook introduced the company's annual developer conference, WWDC, with a pre-recorded message on systemic racism.

Directly referencing the recent police-murder of George Floyd and the protests about racial inequality that have ensued, Cook vowed that Apple is committed to being "a force for change," noting that the country hasn't "lived up to its ideals." The CEO pointed to recent efforts the company has made to do its part in the conversation about racism, including a $100 million commitment to support racial justice with donations to organizations such as the Equal Justice Initiative, and its new developer entrepreneur camp for Black developers.

Cook, speaking from the (empty) Steve Jobs Theater at Apple Park, echoed many of the sentiments he expressed earlier this month in a blog post, in which he acknowledged that "communities of color continue to endure discrimination and trauma." It may have felt mostly like safe, boilerplate commentary, sure, but to say nothing at all would have been an affront to many of its users.

"To create change, we have to reexamine our own views and actions in light of a pain that is deeply felt but too often ignored," Cook wrote in his post ahead of WWDC. "Issues of human dignity will not abide standing on the sidelines. To the Black community — we see you. You matter and your lives matter."

Something he didn't bring up at the start of the event, though, is the mounting scrutiny into Apple's anti-competitive behavior, which has reached new heights in recent weeks. And considering everything the company announced today, that isn't likely to cool down anytime soon.

The arrival of Apple's developer conference this year couldn't feel stranger. We're still in the middle of a pandemic; we're still protesting police violence and systemic racism; our president is a mess; Apple itself is facing more heat than ever for App Store practices that a lot of companies are calling out. Getting excited about software updates, for many of us, feels a bit weird right now. But here we are.

Here's everything you need to know from WWDC 2020: