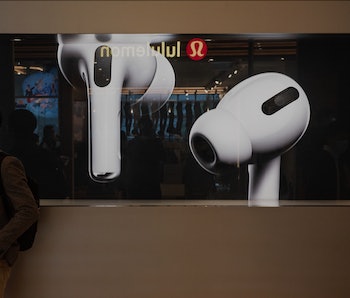 Apple is reportedly developing new versions of its AirPods and AirPods Pro wireless earbuds, according to Bloomberg. The new earbuds would both feature new designs and upgraded chips, and could be announced sometime next year.

Of course, some believe the stems are kept around to function as a status symbol for wearers to signify to others they can afford Apple products. The company makes iPhone cases with its logo on them, after all. But Bloomberg says that Apple has struggled to fit all the AirPods gadgetry into smaller housing, and the existing AirPods buds aren't quite as large in the ear canal as other wireless earbuds. The AirPod stems crucially house the battery — Apple may just have to make the buds larger to remove the stem.

Not that the stem is totally ugly, but some people may prefer a more subdued look that doesn't cramp their personal style. It's also something we've grown used to. When the first AirPods launched, the stems were the butt of jokes, with some people referring to them as Apple earrings. But now that they're such a common sight, the novelty has worn off.

Keep the OGs, please — Besides the AirPods Pro, Apple is also reportedly revamping the standard AirPods to take cues from the Pros, with a shorter stem and replaceable ear-tips. They could be announced as early as the first half of next year.

Hopefully, Apple will keep something like the original AirPods around, as many users don't like in-ear models that need to be pushed deeper in the ear, and some struggle to get a good fit with the Pro's silicone tips. The original AirPods sort of just "sit" there, which works for most people, albeit not all.

Maybe Apple could keep the original AirPods around with a price point of $99 — especially now that the company doesn't include wired EarPods or wall adapters with new iPhones.

Besides revamped AirPods, Apple is reportedly continuing to develop over-ear headphones but has pushed their release further due to issues with the headband being too tight. It's also considering another HomePod model to fall between the $299 HomePod and the $99 HomePod mini. We're personally hoping for a soundbar model to beef up our home theaters.