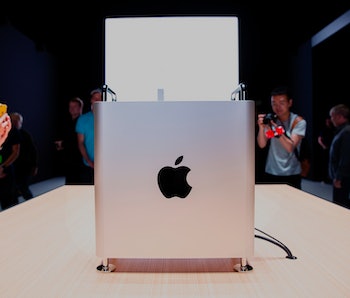 In a remarkably un-Apple move, the company is today going to start selling an SSD upgrade kit for the Mac Pro, its workhorse desktop machine that's meant to be easy to customize, but that has traditionally required workarounds if users want to replace whatever SSD they opted for when they initially bought the machine.

The Verge first reported the news, which Apple subsequently confirmed. The kit is supposed to go on sale sometime today but isn't available on Apple's website at the time of writing. The new SSDs will be available in sizes up to 8TB and replace the machine's existing SSD, so if you already have a high-capacity drive this may not be important to you. But for those users who opted for the 256GB, 512GB, or 1TB SSD options the Mac Pro can be purchased with, this is great news. Plus, they won't have to lug their Mac Pro to an Apple Store — many of which remain closed — to get the new SSD installed, as Apple will offer instructions on installing the new drive.

Another Apple lock-in — Apple's T2 security chip built into the Mac Pro is supposed to check for data tampering during the bootup process so that someone can't try and steal data from you. The new chip also makes repairs and replacements difficult because the T2 is a proprietary Apple component, and if Apple diagnostics software isn't used to replace a component, it might not function, because Apple doesn't want someone installing a component in your computer that includes intentional backdoors.

The new kit addresses this problem by being an Apple-certified and approved component. Sadly for owners of Apple's laptops, it's been a number of generations of devices since it was possible to swap out a hard-drive, or any components at all. These days, everything is soldered to the motherboard, and even formerly modular components like keyboards are often a single piece, which created problems with Apple's disastrous Butterfly keyboard because if one key was rendered useless by a cookie crumb the whole thing had to be fixed.

Repairability fights — While it's great the new SSD kits offer customers flexibility it's also a classic example of Apple pushing customers to spend money with it directly rather than on third-party components, which are almost always cheaper. On the flip side, Apple's proprietary T2 chip enables all sorts of critical security functions, and Apple likely wants to make sure that those features remain intact even when a critical component is replaced.

Apple has long faced scrutiny and criticism for making it difficult for its devices to be repaired and by only offering parts and support to vetted third-party technicians, thereby limiting who can fix its gadgets. Some say it runs contrary to Apple's commitment to environmental sustainability because it pushes customers to throw out their devices and buy new ones rather than upgrading or repairing existing ones.

The proprietary T2 chip has already caused headaches for repair shops because they cannot easily replace hard drives in new Apple computers unless they're brought in by the original owner. This won't do anything to address that problem, but it will help alleviate the buyer's remorse of those people who thought 256GB of storage was ever going to be enough.