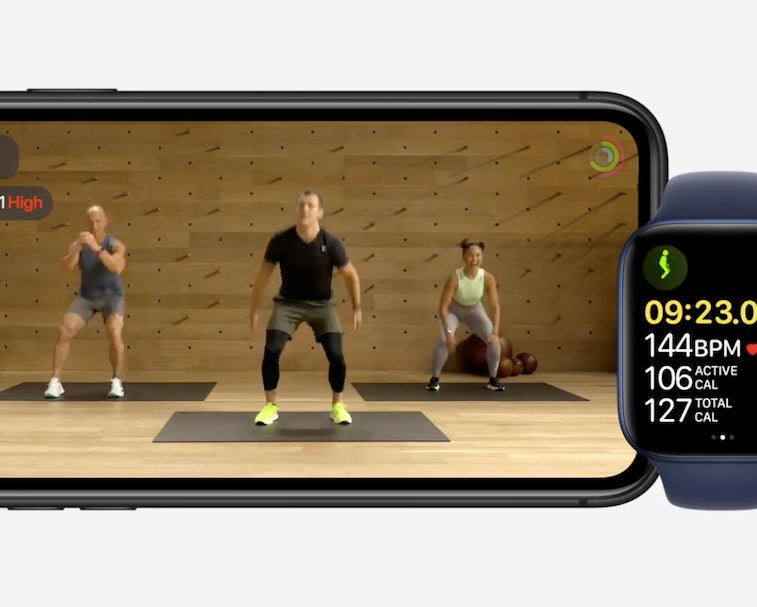 Apple announced during its Time Flies event that it's launching a new video workout subscription service later this year called Fitness+. The service will offer workout videos from across ten different exercise types — from yoga to running and cycling — taught by professional trainers. With an Apple Watch, live metrics are overlaid on top of the video so you can see how well you're exerting yourself.

Videos can be streamed from an Apple TV, iPhone, or iPad, so you can watch classes at home or on a treadmill at the gym. Apple says most classes don't even require any equipment though, or at most a pair of dumbells.

RIP Peloton? — Competitor Peloton saw its stock fall about 5 percent on the announcement of Fitness+. It offers its own subscription service that can be used independent of its bike and treadmill, and the company has touted that service as offering huge growth potential beyond the market for its luxury exercise bikes. The Peloton digital subscription costs $12.99 per month whereas Fitness+ is being priced at $9.99 a month, though the latter only offers pre-recorded classes whereas Peloton has a mix of live and recorded options.

Bundling benefits — Peloton's CEO said that Apple's new service legitimizes the space, but it could pose a serious threat to Peloton as Apple promotes Fitness+ to the millions of Apple Watch owners out there. The company says it will offer three months free with purchases of its new Watch Series 6 and Watch SE. It also plans to offer Fitness+ as part of its new Apple One subscription bundle launching in the fall. In the top-tier $29.95 offering, Apple will give subscribers access to Fitness+ as well as Apple Music, Apple TV+, Apple Arcade, iCloud storage, and News+. That's basically an unbeatable value and could see Apple scoop up customers from other competitors like Spotify.

Heavy promotion of its services and the new Apple One subscription may prompt increased cries that Apple has an unfair advantage over competitors due to its control of the iOS platform. Peloton will probably be fine, however, as it offers a more premium experience than Fitness+.

Services, services, services — Apple generates more than $13 billion in revenue each quarter from services, and subscriptions are a key aspect of Apple's future growth as its hardware sales slow. Apple Music now touts more than 60 million subscribers, though the company has been mum about the success of its other services like TV+ and News+. The new bundles start at $14.99 per month and will likely buoy those services by getting users trying them if they hadn't before.

Apple says subscribers to Apple One can save anywhere from $6 to as much as $25 per month over paying for each bundled service individually.

Even outside of a bundle, Fitness+ is launching with a lot of tailwinds. Gyms in many areas around the U.S. remain closed or at limited capacity, and Peloton has reported seeing its subscriptions grow 30 percent in the most recent quarter to 2.6 million subscribers. People are willing to give at-home workouts a chance in a way they hadn't before, and might find they like it.