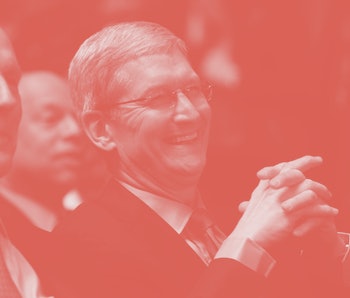 The latest version of Apple’s iOS 14 beta illustrated some important changes to how Apple is handling ad-tracking in future iterations of its operating system. But it seems Apple is exempting itself from these new ad-tracking toggles, as analyst Eric Seufert pointed out on Twitter earlier this month.

The toggles in question are listed under iOS 14’s Privacy settings. There’s a newly added menu called “Tracking” with just one option: Allow Apps to Request to Track. Turning the switch off ostensibly blocks all requests for Apple’s IDFAs (Identifiers for Advertisers), which are usually used for serving customized ads, and what Facebook's bleak it'll be losing access to.

What Apple fails to mention is that its own ad ecosystem is not included in this toggle. No, if you want to disable tracking for Apple advertising, you have to scroll all the way to the bottom of the Settings app to locate a menu called “Apple Advertising.”

There’s really no good reason why Apple would need to separate its own tracking toggle from the dedicated “Tracking” settings menu. Except that by making it more difficult to turn off its ads users are less likely to. Which is exactly the sort of dark-pattern behavior Apple keeps claiming to be opposed to.

Cutting down on unwanted tracking — It’s 2020, and we are more aware than ever of the extent to which our smartphones are used as tracking devices. The addition of a quick toggle to minimize this tracking is more than a welcome addition — at this point, it’s a necessary one.

Companies that rely on Apple’s extensive device network for advertising purposes will be less pleased about the development. A study from Tap Research found that 85 percent of participants will choose to opt-out of tracking if asked clearly about it. That willingness to turn off ad-related tracking could hurt revenue for companies like Facebook, especially when all it takes is a single tap to kill tracking across the device.

Underhanded at best — Apple is pulling some seriously shady tricks with this new settings layout. The new Tracking menu is located at the top of the Privacy settings page, just under Location Services — a section of the app that will be familiar to many. It’s prime placement, really.

Apple also doesn’t make it at all clear that the main Tracking switch doesn’t opt users out of Apple’s services. The language is purposefully vague — it seems that turning the option off will turn off all ad tracking. Many users won’t feel the need to scroll to the very bottom of the Privacy page, which is where the toggle for Apple’s advertising network can be found. We see what you're doing Apple, and we don't like it.