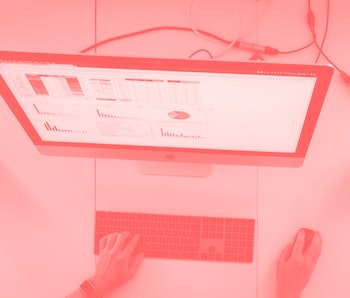 Apple is reportedly going to redesign its entire line of desktop Macs as it continues the transition from Intel chips to its own M1 processors. The biggest changes will come to the iMac, which for years has featured thick bezels and a large chin area.

According to Bloomberg, the redesigned iMac will look similar to Apple's Pro Display XDR, with its near-borderless face and flat back. Both the 21.5-inch and 27-inch models will reportedly be replaced with new versions.

Update season — Besides the iMac, it's expected that Apple will release updated Mac Pros. One will feature the same design as the existing model and continue using Intel chips, while the other will use the M1 processor and be "less than half the size" of the current Mac Pro. Which does make us wonder how well the Intel-based version will sell.

Apple is also reportedly planning on updating the MacBook Pros this year, dropping the Touch Bar and reintroducing MagSafe charging.

Intel not inside — The move away from Intel chips has been the biggest update to Apple's computers in years. Though the public was initially skeptical that it could pull off such a major transition, the company last year released new MacBooks and a Mac Mini with M1 processors that are blazingly fast. They exhibit virtually no issues running popular applications.

Apple made the move in part because Intel has fallen behind in recent years as competitors Nvidia and AMD produce chips that are smaller and more power-efficient. The M1 Macs that have already been released have much-improved battery life. By moving away from third-party suppliers, Apple can also bring costs down.

Cheaper monitor, yes please — Another interesting tidbit from the Bloomberg report is that Apple is reportedly planning to release a lower-priced monitor. The Pro Display XDR is currently the only external monitor it sells, and it goes for $5,000. That's before even factoring in the stand that costs $1,000, a wild price considering its function. But then, this is the same company that sells $700 Mac Pro wheels.