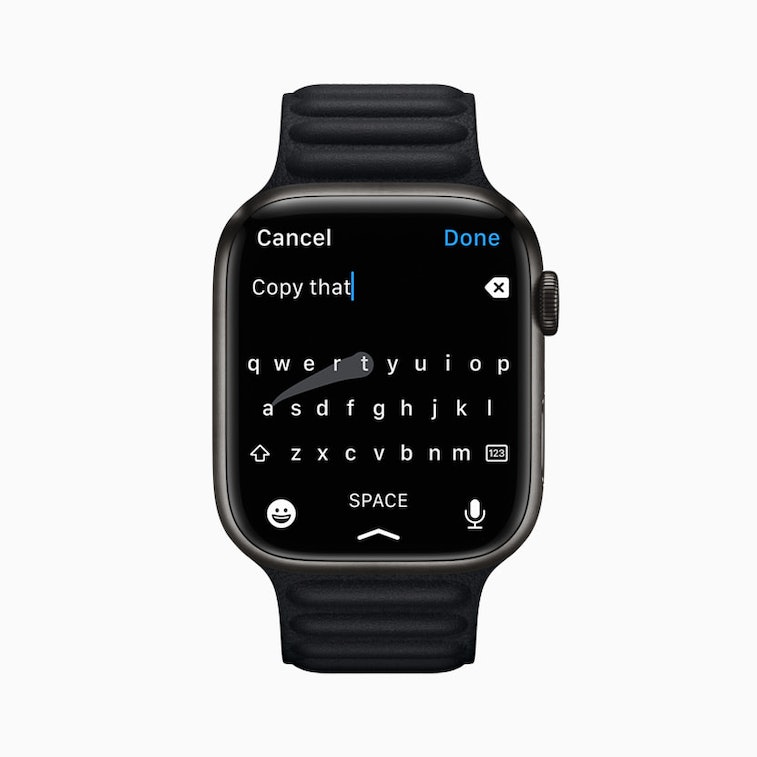 Apple today held its California Streaming keynote, during which it unveiled the iPhone 13 as well as updated versions of the Apple Watch and iPad mini. But one, seemingly minor product announcement has caused a stir in the developer community: the new full software keyboard that Apple is adding to the Apple Watch.

It was just last month that Kosta Eleftheriou, the developer of FlickType, announced that his swipe-based keyboard for the blind would be pulled off the App Store over objections by Apple. Its reasoning was unclear, with Eleftheriou saying that Apple had begun rejecting updates for the app because it required full system access, a fact that Eleftheriou disputed, saying that it still worked without the permissions.

A separate version for the Apple Watch would remain, but then Apple pulled that one as well, telling Eleftheriou that keyboards aren’t allowed on the Apple Watch.

Now Apple has announced its own, nearly-identical keyboard for the Apple Watch — and seven years after the smartwatch was introduced, no less. Eleftheriou believes there’s no coincidence here. “So now we know,” he wrote in a tweet. “See you in court, [Apple].” Eleftheriou has already sued Apple for blocking his iPhone-based keyboard, a move he argues is anti-competitive.

Sherlocking — Apple has in the past taken ideas from the developer community and built them into its products. There’s actually a name for it — “Sherlocked,” or the phenomenon where Apple takes a popular third-party tool and renders it unnecessary by copying it directly. It’s happened many times over, but under the current climate where sentiment by developers is not in Apple’s favor, it looks particularly bad.

Being based in California, Apple’s move against FlickType could be in direct violation of the state’s Unfair Competition Law (UCL), which is broadly written but forbids unfair business acts and allows the court to order injunctions to prevent unfair competition. Apple doesn’t allow developers to offer their apps outside the App Store, meaning they have to follow its rules and are always at its mercy.

It’s under the UCL law that Apple was recently forced by a judge to change its App Store rules and allow developers to link to outside payment methods, where they don’t have to pay it a commission. Developers argue Apple’s demand that they use its payment method is harmful to competition as they might get a better deal from another payment processor if it was allowed, and the fees, in general, harm small businesses.

Changing tides — Developers used to be much more deferential towards Apple for creating slick tools and a safe marketplace for selling apps. But now they’ve become embittered over Apple’s strict, byzantine system of rules, and the 15-30 percent tax it charges on in-app sales.

The company isn’t the small, rebellious upstart it was once, but a $2.5 trillion behemoth that brings in gobs of cash. Developers cannot as easily absorb the costs Apple charges and are always at risk of losing their business, as in the case of FlickType. Apple’s demands no longer feel fair or reasonable, and critics say that its defense that it’s ensuring a safe environment for consumers is cover for it to continue making billions off the App Store. It’s believed Apple generates more than $20 billion in revenue from the App Store each year.