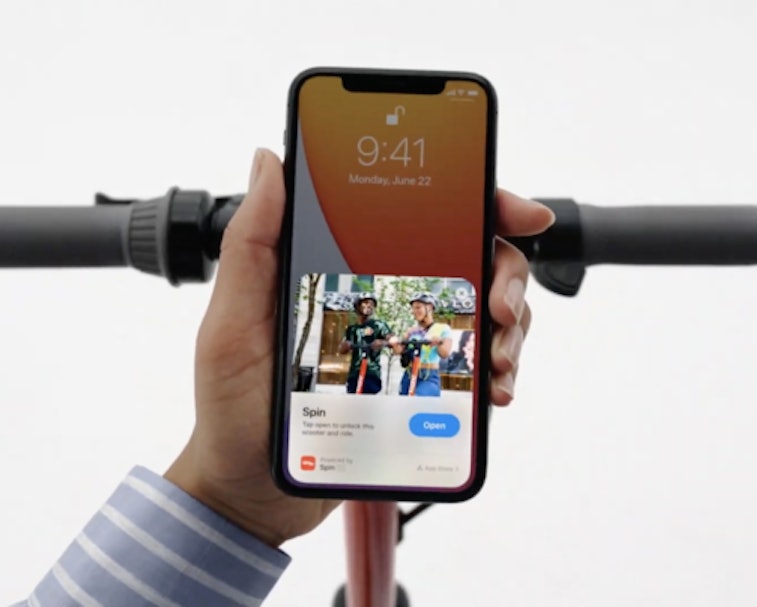 Apple today announced a feature for the upcoming iOS 14 called App Clips, a way for users to easily access applications and complete a specific task without downloading the full version from the App Store.

App Clips support both QR codes and NFC chips that a business can link to their app using Apple's iOS SDK. When a customer walks up to a dockless scooter, for instance, they scan the QR code on the handlebar using their iPhone. A widget launches that allows the user to start a rental using Apple Pay and authenticate with Sign in with Apple in order to get receipts.

Downloading apps is annoying — The arduous process of downloading an app and creating an account can be a big hurdle to get people trying new services — App Clips are meant to help businesses bring in new customers without all that friction.

Full apps offer much more comprehensive features, but sometimes you don't want to download an app for a service you're not sure you'll use often, or you're on the go and don't have the time to do so. Apple offered an example of those parking garages that offer mobile apps for payment. Nobody wants to download those apps or has the time for it, and with App Clips you wouldn't have to.

Apple says that App Clips that aren't about cutting out developers, but rather offering customers choice and discoverability. And developers don't need to support App Clips unless they choose to do so.

Privacy and choice — Because this is Apple after all, App Clips are a privacy-friendly way of interfacing with developers. App Clips take advantage of Sign in with Apple, so users can agree to receive information from an app without sharing their actual email address. Apple Pay completes purchases using temporary credit card numbers that are discarded after each use — important in a world where data leaks are all too common.

Some developers may not choose to support App Clips because they want to maintain a direct relationship with their customers and wrangle them into a loyalty program. A business like the aforementioned parking garage probably doesn't care much about creating brand loyalty and repeat customers, however.

App Clips that you've used before get saved into the new App Library screen on iOS 14 so you can quickly return to ones you want to use again. Maybe you frequently order coffee from the same local cafe. The App Clip, then, functions sort of as a quick shortcut to doing so without much effort.

The developer beta of iOS 14 is available today, with a public beta for all customers coming available sometime in July.