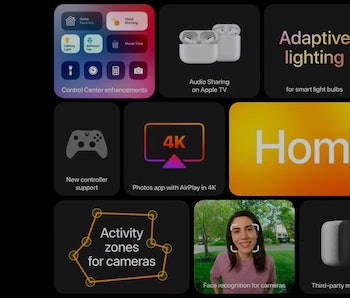 Today at WWDC 2020, Apple announced many, many things. However, buried within the new chips and widgets were some surprising developments for Apple's tvOS. With stiff competition from Sony, Roku, Google, and your local cable company, Apple TV hasn't exactly dominated the living room just yet and the company is making it clear that they're not satisfied with their current market position.

The new philosophy seems to be turning your TV less into a place for dumping whatever video you're bingeing while you play on your phone and more into yet another screen in a variety of form factors offered throughout the home.

Picture it — Among the features Apple dropped, they seemed most proud of their robust new picture-in-picture mode which will allow customers to see their HomeKit-connected security cameras with only a Siri request. This should be a welcome addition for parents, particularly overwhelmed parents during this period of social distancing and working (and schooling) from home.

Pippin — The company also announced support for Microsoft's extremely beloved Series 2 Xbox Elite Wireless Controller as well as its award-winning Adaptive Controller, an integral accessibility tool for gamers with unique needs. This alongside their multiuser support and instantly resumed gameplay features should help the Apple TV slow (but surely) inch its way towards giving the Nintendo Switch some competition.

Building the Foundation — To cap it all off, Apple dropped the trailer for its new Apple TV+ series Foundation, based on the classic novel by Isaac Asimov. The fledging video service is in desperate need of a big, splashy hit and, judging by what we see here, this could be it.

All in all, there was nothing groundbreaking or game-changing for Apple's TV products — but then, what groundbreaking changes has the company left to make? By tightening the screws, adding value, and better integrating its offerings with the company's larger family of products, Apple continues to make an increasingly compelling case for letting it run the biggest screen in your home.