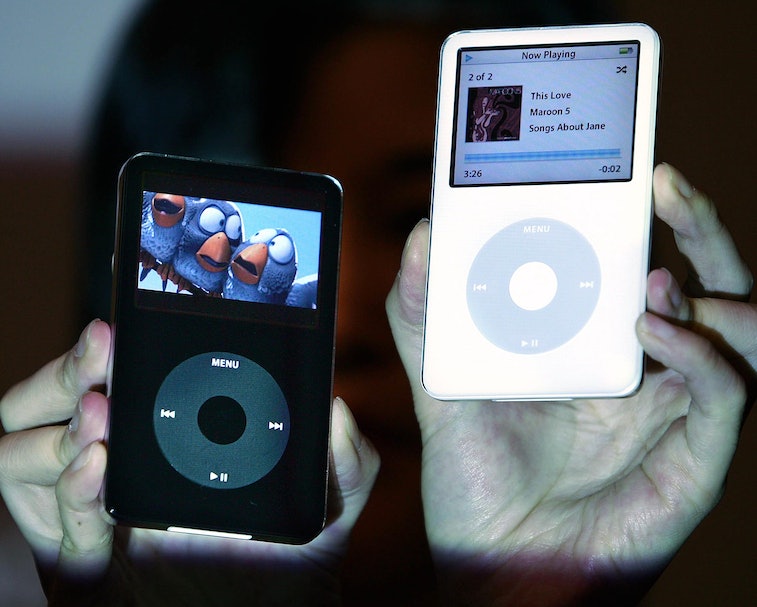 A former software engineer on Apple's iPod team says in 2005 the company helped the Department of Energy create a modified 5th-generation iPod (aka the "iPod video") that could secretly capture mysterious data and record it to a hidden partition on the device. The engineer, David Shayer, doesn't know exactly what the purpose of the project was but speculates the iPod was turned into a Geiger counter for surreptitiously measuring radiation levels.

The whole story is pretty wild, but Shayer brings the receipts, including business cards for the two employees of defense contractor Bechtel who worked on the secret iPod from within a confined space at Apple HQ. Apparently only four people at Apple knew about the project that the company did it as a favor to the U.S. government. Shayer was assigned by the director of iPod software to assist the contractors as needed.

Besides Shayer, the former head of the iPod project Tony Fadell said in a tweet about the story that "the project was real w/o a doubt. There was whole (sic) surreal drama & interesting story about how this project was kicked off & then kept secret."

Some real spy shit — At the time, the iPod operating system was built from a mishmash of different software acquired from other companies — Apple hadn't really built the operating system from the ground up like it has since with iOS and macOS. Shayer had to walk the Bechtel employees through how the OS worked but says that otherwise they were left to their own devices.

No Apple employees ever directly worked on the secret iPod, and Shayer says that the only hint the defense contractors offered about its purpose was that they needed the ability to secretly record data onto the iPod's hard drive in a way that it would remain hidden. The iPod needed to function just like normal when it wasn't recording, and plugging it into a Windows or Mac computer couldn't reveal the hidden partition. Shayer never even saw the extra hardware they apparently installed in the device.

Contradictions — Comically, Apple was helping the government create devices to exfiltrate data in secret but also expected the engineers from Bechtel to keep any and all iPod source code within the walls of its campus. They were only allowed to leave the building with their iPods running the modified OS.

These types of secret collaborations between major tech companies and the U.S. government aren't unusual. You can imagine how in 2005 if federal agents wanted to be able to capture data surreptitiously, pretending they're actually listening to music on a then-ubiquitous iPod that's meanwhile measuring radiation could be one good way to get the jobs done without arousing suspicion.

Shayer theorizes that, because the Department of Energy in 2005 was requesting more funding for its nuclear deterrence program, radiation measurement is the most likely use case for the device he helped build. Walking around a city looking for spikes in radiation could lead agents to secret bomb programs. Others have argued that an iPod wouldn't be a good device to hide a Geiger counter because the metal frame might block a lot of radiation and result in inaccurate measurements.

Made for Hollywood — The whole story sounds like a great movie plot, maybe even something that could make people open Apple TV+ for once if it was an exclusive show. But good luck getting Apple to ever admit to this. It's surprising enough that a former Apple employee is speaking out on the record about the project.