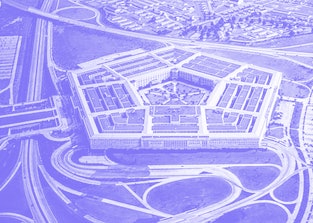 The value of the JEDI cloud computing contract that's been canceled.

The Department of Defense got so annoyed by quarreling between Microsoft and Amazon, it’s decided to cancel a $10 billion contract that would’ve seen the former help modernize the Pentagon’s infrastructure with new cloud computing services, CNBC reports.

The two companies fought bitterly over the JEDI (Joint Enterprise Defense Infrastructure) contract, as it was called. After the DoD awarded the deal to Microsoft in 2019, it became the subject of a legal battle as Amazon argued that former President Trump’s attacks on then-CEO Jeff Bezos influenced the decision.

A review by the Pentagon’s inspector general found that the win by Microsoft did not appear to be influenced by the White House, but that hasn’t stopped the DoD from moving to start afresh. It’s unclear whether the legal fighting is the real reason the contract was cancelled, but it seems likely to have had some influence.

Compromise — Not all is bad news for the two companies, however. The Pentagon still needs to modernize its technology operations and plans to instead work with multiple providers on its cloud needs. Both Microsoft and Amazon will be asked to submit proposals as part of the new plan, as the Pentagon believes they’re the two cloud providers best equipped to meet its needs, including top-tier cybersecurity controls and constant access from anywhere in the world.

Microsoft and Amazon are among the tech giants that have pushed heavily into cloud computing as their next big driver in revenue growth. Both companies developed sophisticated networks of servers to power their own businesses before realizing they could sell the same resources to power the rest of the internet. So winning these lucrative contracts has become a big deal.

Employee pushback — The JEDI deal wasn’t just fought in the courts, but inside the two companies as well. Google dropped its bid for the contract following months of protests by employees, who opposed its participation in defense-related contracts over ethical concerns about U.S. participation in unnecessary conflicts.

Employees at Microsoft and Amazon also protested the contract, but their respective CEOs seemed unconcerned.

In a blog post on Tuesday, Microsoft said the intervening 20 months since it was awarded the contract, with no work having ever started, shows that that the government procurement process is broken.

“The 20 months since DoD selected Microsoft as its JEDI partner highlights issues that warrant the attention of policymakers: when one company can delay, for years, critical technology upgrades for those who defend our nation, the protest process needs reform,” the company wrote.

Both companies are in an ethically dubious position for providing their services to the DoD. But Microsoft is also right that Amazon bogging down the government in the name of profits isn’t great either. Nobody here is squeaky clean.