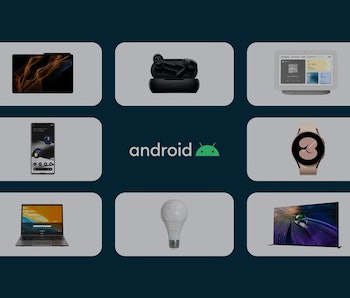 Today Google showed off just a little more of Android 13, the company’s latest mobile operating system. The OS has been in developer beta for a few months now, but the company took some time at Google I/O 2022 to hammer home Android 13’s ideals.

With Android 13, Google says it’s focusing on three major tenets: phone at the center, extending beyond the phone, and better together. Unfortunately, we didn’t get much of a deep dive on any of these — very little was shown of Android 13 actually running on a device. If you’re expecting a sweeping change a la Android 12, look elsewhere.

Notably, many of the features shown off today are ones Apple has already implemented in its own device ecosystem. Google is really trying to make Android 13 more attractive to customers used to these features.

The second public beta of Android 13 is available for download now. No word on a release date for the full operating system.

Souped-up messaging — Google spent a quick second speaking about its progress with RCS, which is essentially the company’s answer to Apple’s iMessage service.

More than 500 million Android users are already using the Messages app every month, Google says, and it’s expecting plenty more to do so soon. Google tried to hammer home the potential of end-to-end encryption with RCS, though support for that security is still limited. Group chat support won’t be available (in beta) until later this year.

Google also took a quick second to make a dig at Apple’s walled garden: “We hope every mobile operating system gets the message and upgrades to RCS.”

New Google Wallet — Google Wallet is receiving some significant upgrades that bring it closer to what Apple’s done with its own Wallet app. You’ll be able to store credit card information in there, yes, but also vaccine passports and passes to some venues. All that secure info is stored on your device; it’s not even shared with Google.

For example, Google is adding the ability to copy information from one device and paste it onto another. Casting abilities are also expanding with Android 13; Google says it’s working with many new partners to make Casting more universal.

Phone Hub is also receiving some upgrades. You’ll now be able to send and receive RCS messages from your Chromebook as they come in. Kind of like iMessage.

Android 13 will bring some of iOS’s best features to Google-powered devices. That’s a good thing, as far as we’re concerned.