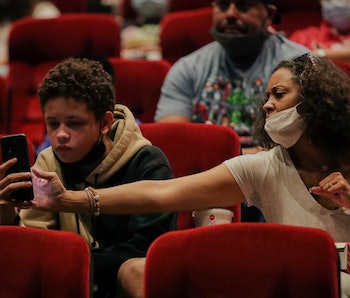 AMC recently announced it would soon allow moviegoers to pay for tickets in bitcoin, and now CEO Adam Aron has said that cryptocurrency push will expand to include Ethereum, Litecoin, and Bitcoin Cash. The theater chain expects to begin accepting the digital currencies by year’s end.

Too volatile — In accepting cryptocurrency, AMC is hoping that Reddit’s meme stock traders won’t just buy shares in the company but also visit its theaters. Though, it seems doubtful that many holders of Ethereum would actually want to trade it for movie tickets — the value of one ether, as the coins are called, is up 832 percent in the past year, at $3,595 up from $389 a year ago. It’s also still hard to pay in cryptocurrencies, and transaction fees can be high.

More companies like PayPal are making it easy to buy and sell cryptocurrencies, but it doesn’t seem like that will grease the wheels on everyday transactions. Cryptocurrencies have certain use cases, like favorable fees sending money abroad and the ability to clear transactions more quickly than through traditional banking.

Legislators in the U.S. are currently evaluating ways to regulate cryptocurrencies in order to combat issues like market manipulation.

Accepting digital currency is probably just a marketing thing, a shrewd appeal to the Redditors who have boosted AMC’s stock in the past year. Everyday people revolted against the “sophisticated” traders on Wall Street, who made money betting against flagging companies like AMC at a time when millions were suffering unemployment. Banding together as a collective, Redditors have been able to become their own formidable force, profiting by picking winners and losers — like AMC and GameStop — in the same way that Wall Street can force a company up or down based on predictions. Cryptocurrencies are a similar symbol of populism as they’re something new that investors don’t understand or control.

AMC’s turnaround — AMC was able to use a major boost in demand for its stock to sell shares and pay down debts. And people have started to return to theaters, though AMC is still seeing far viewer visitors than pre-pandemic. There remain questions about how the switch to streaming will impact theaters. Disney has said it will release the rest of its 2021 movies into theaters, but Paramount, HBO, and others are committed to streaming releases as they can avoid paying a middleman. There’s still theater appeal for actors though.