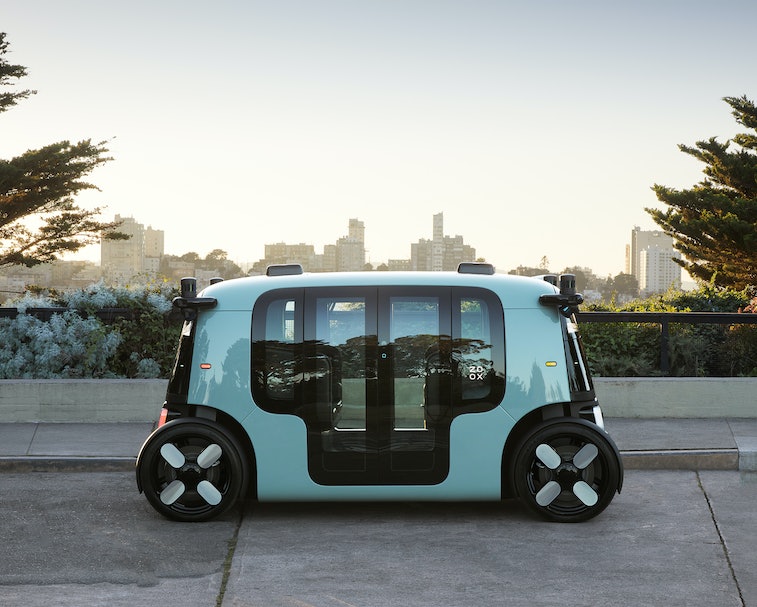 Amazon-owned Zoox today unveiled its first fully autonomous taxi, a rectangular vehicle capable of transporting four people at up to 75 miles per hour. The Zoox L5 is all-electric and so autonomous it doesn’t even include a steering wheel. Oh, and it’s bi-directional, so it can move forward or backward without turning around.

It’s taken six years for Zoox to reveal the fruits of its labors to the world — and it looks like that time was well-spent. The Zoox L5 is sleek as hell and, though we’ll reserve final judgment until it’s actually out on the road, it has the potential to actually prove itself as a significant step in robotaxi domination. Uber who?

Not just autonomous — What Zoox gets so right in the L5’s design is that it’s capable of driving itself all over town, yes, but it’s also fun. This isn’t just a sedan that Zoox retrofitted with sensors and complex AI; it’s in a category of its own making.

Since the L5 doesn’t have to worry about fitting a driver seat or steering wheel into the mix, it can instead use that space for stretching out with your fellow riders. The interior is comprised of two loveseat-style bench seats that face each other opposite floor-to-ceiling windows.

Zoox also knows riders will be wary of an autonomous car’s safety. The company says the L5 has “more than 100” safety innovations, including a special bidrectional airbag system and a sensor LiDAR sensor system that gives the car a 270-degree view of all four corners of the vehicle.

Robotaxi dreaming — When we’ll actually be able to hail a Zoox is hard to say, but suffice it to say we won’t be rolling up to Christmas dinner in one this year. Which is too bad, really; the lack of driver could work well during a pandemic.

It’s unclear whether or not Zoox has received federal approval for operation, though the Federal Motor Vehicle Safety Standards says it’s passed all the necessary crash tests. TechCrunch notes that federal standards require vehicles to have steering wheels; only one other company, autonomous delivery startup Nuro, has received an exemption on this basis, and that was only for a low-speed electric vehicle that doesn’t carry people.

The robotaxi industry has rapidly turned into a racing ground. Intel paid nearly $1 billion for robotaxi startup Moovit earlier this year, forecasting at the time that the industry would hit $160 billion in the next ten years.

Amazon purchased Zoox not long after for somewhere around $1 billion. Looks like the company has made the best of its pandemic setbacks.