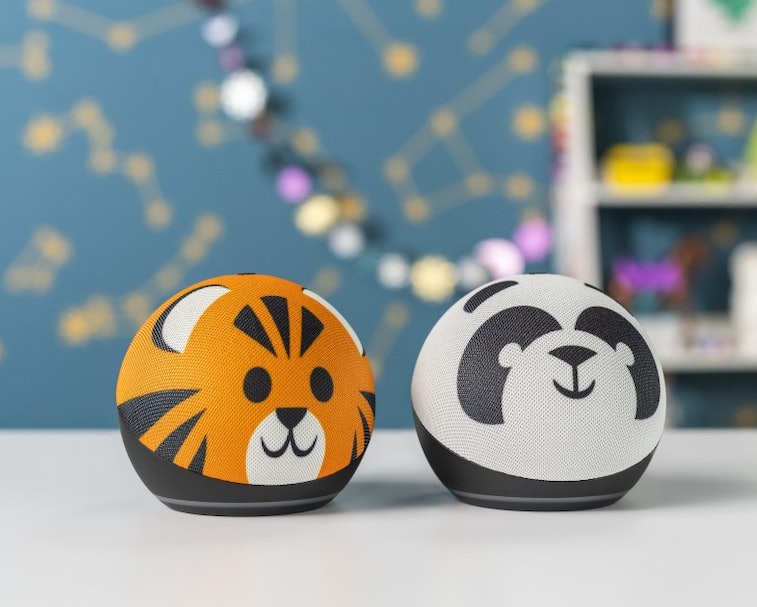 During a dedicated hardware-focused event today Amazon unveiled redesigned versions of its Echo smart speakers, including the standard Echo that now sports a spherical design and which comes in child-friendly designs with animal faces on them. The company says the new Echo will "fit beautifully" into any part of the home. Assuming, of course, that home is full of spherical things, or children who you don't mind being listened to by a digital assistant.

Copying Facebook — Amazon also revamped the Echo Dot and Echo Show. The latter, which is unique in that it supports video calling, now looks a lot like Facebook's Portal device. The screen will silently swivel and follow you as you move around your room, and it will zoom in on your face to keep it in frame, which is another feature cribbed from the Portal. Amazon says that support for Zoom is coming soon on top of existing support for Skype, so you'll be able to use it to video call with people who don't have Echo devices.

The new spherical design of the standard Echo is said to maximize audio quality coming from the speaker's 3-inch woofer and dual-firing tweeters. The new Echo is supposed to automatically sense the acoustics of a room and adjust playback accordingly. It also includes a built-in smarthome hub now — previously you had to shell out extra for the Echo Plus to get support for controlling gadgets around your home.

The new Echo speaker is available for pre-order today for $99.99 and is supposed to ship sometime later this year. The children's edition will cost $59.99, and the Echo Show will cost $249.99 (which is the same as the far more horrifying Always Home Cam drone camera from Amazon subsidiary Ring).

Throwing spaghetti — Amazon has a tendency to throw a lot of ideas at the wall with its smart speaker lineup. It's added Alexa to everything from microwaves to TVs. Heck, there's even an "Alexa Auto" for bringing the assistant into your car. The company did discontinue its Echo Look earlier this year, however. That device featured cameras that would take pictures of a user's outfit and rate their "fit," something Amazon now offers directly through its mobile app.

That strategy of trying everything has been a good one for Amazon. The Echo is by far the most popular smart speaker on the market, and in the connected TV space, its Fire TV product is second only to Roku. But Amazon has a problem — unlike Apple's Siri or Google's Assistant, it doesn't live on mobile phones, which are the gadgets most people use most each day.

Alexa wants to be everywhere — Owning as many platforms outside of mobile phones as possible is important for Amazon because it helps keep customers within its ecosystem, ordering products from its site and subscribing to new services. Amazon Music, despite launching into a crowded field, has managed to grab an estimated 15 percent share of the streaming market because the company promotes it through the Echo with audio advertisements and bundles it with Amazon Prime. Amazon also takes a cut of ad revenue from channels on Fire TV.

One thing that hasn't really worked out for Amazon has been turning Alexa into a platform for voice-based apps from third-party developers. Most customers just use their Echo speakers for common functions like playing music and checking the weather. With every new device, you can feel the company trying to expand Alexa's reach incrementally further.