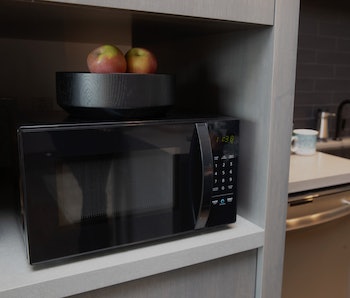 Amazon's own branded products seem to overheat and explode a disproportionate amount to other brands, according to an investigation by CNN. AmazonBasics offers more than 5,000 products that are intended as affordable options for everything from cheap office chairs to microwaves. The latter of those is one that seems to be causing issues, with reports of flames and sparking.

Speed over safety — Making its own products can be more profitable because Amazon orders directly from manufacturers in China and can therefore cut out middleman companies. But as AmazonBasics has become popular, it sounds like the company has put pressure on employees to release new offerings at a faster cadence and spend less time on testing. One employee said before she left she would increasingly disagree with managers about pushing out products before they were sufficiently tested.

Amazon says it tests all its AmazonBasics products rigorously, but after CNN asked about a few featuring reviews with mention of flames or explosions, the company quietly removed them or made them unavailable for purchase.

Charger go boom — The microwave Amazon sells was much talked about when it was released because it has an Alexa button and can be controlled from a distance, which apparently someone might want. Out of 5,000 reviews, though, roughly 5 percent mentioned problems with flames and smoke. A similar microwave from another brand with 1,350 reviews featured only 10 similar complaints.

In CNN's story, a former Amazon employee said in the early days of AmazonBasics that even a few reports of serious issues would cause a product to be pulled. Experts say after a handful of reports a product should be considered defective.

To illustrate the seriousness of the issue, a customer that spoke to CNN said that an AmazonBasics surge protector he bought caught fire near his 9-month-old's nursery — more than 1.7 percent of the 2,600 reviews of the product mentioned danger. Another man was sent to the hospital after his AmazonBasics charging cable burst into flames while he slept. Defects in electrical hardware are a lot more serious than bugs in software. At Amazon's scale, a small single-digit report rate can equate to a lot of explosions.

Reputational risk — Amazon risks harming its reputation if too many of its private label products cause serious problems. The company has suffered in the past from counterfeit and shoddy products being listed on its platform, and even seemingly allowed some controlled substances onto the site. Customers may feel that Amazon is fast and offers a wide selection, but they may also begin to feel unsure that the items they're buying on the site are legit or safe.

In the past high rates of explosion have led to the banning of Samsung's Note 4 on airplanes, and an epidemic of hoverboards burning down homes.

Sometimes it can be better to drop a little extra money on brand names. Hopefully Amazon will slow down a bit with releasing new products and improve its quality assurance. How many different versions of a USB car chargers do we really need? Because AmazonBasics has at least six right now.