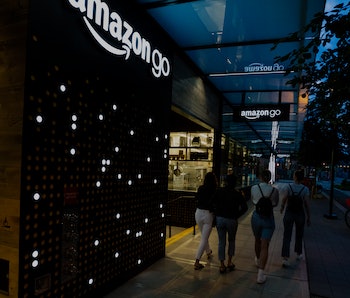 Amazon last year introduced biometric palm print scanners at its stores across the United States, including Amazon Go and Amazon Books. Now the company wants to entice customers to begin using the technology with a $10 promotional credit. All you have to do to earn the credit is enroll your palm print at one of its stores and link it to your Amazon account.

Scan and go — The idea with Amazon One, as the scanners are called, is to make it even faster to zip through its stores, some of which are completely cashier-less. The technology varies by store, but Amazon Go locations use a series of cameras and weight sensors that identify what you take off a shelf, with your Amazon account automatically billed for whatever items you leave the store with.

But what about privacy? — Of course, privacy is a concern here and no doubt a reason why Amazon is using cash incentives to encourage enrollment. Some cohort of people will be wary that their biometric data could be used to track them indefinitely. Amazon could collect data on a person that are linked to them forever — you can’t exactly change your palm, after all. Or it could sell that palm print to a third party one day, and it could be used for identity fraud, or other horrors. Amazon says it stores palm scans indefinitely, unless you choose to delete the data or if you don’t use the feature for two years... which isn’t exactly reassuring.

Grocery biz — Amazon’s store footprint remains small when compared to other retailers like Walmart, but the opportunity is sizable if it can get even a small sliver of the U.S. grocery market. The company has continued to experiment with different store formats — it bought Whole Foods in 2017, and besides the Amazon Go contactless convenience stores, it has the larger-format Amazon Go Grocery store and, confusingly, another grocery store under the Amazon Fresh brand.

Besides opening its own stores, Amazon is trying to license the contactless technology to other retailers. The idea there, potentially, is similar to that of Amazon Web Services. The company initially develops a technology to meet its own needs, eventually selling it to everyone as a service. Amazon says it wouldn’t collect transaction data from third-party locations for its own uses... but it also says it doesn’t use data on merchants who use it for fulfillment to launch its own products, and we know that’s a lie.

Much of Amazon’s contactless technology is still in its infancy, and feels like a reflection of the priorities of Jeff Bezos, who has accumulated so much wealth that he’s become preoccupied with the smallest inconveniences — waiting in line or using a self-checkout isn’t that burdensome.