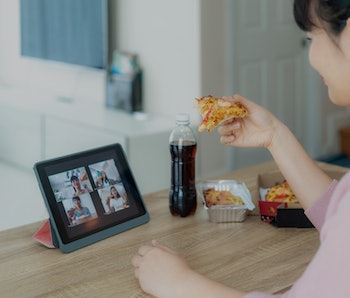 Amazon has announced a new Watch Party feature for Prime Video, enabling subscribers to watch popular Amazon originals like Fleabag together with their friends and family — from a safe distance, of course. The feature is live starting today, though it's limited to desktop for now and U.S. customers only.

Do you even have 100 friends? — For any show or movie that's supported, users will see a new Watch Party icon that they can click to create a viewing room. A custom URL will be provided that the host can share with friends they want in the room. Up to 100 people can be in a room at once, if you're Mr. Popular or something and even know that many people.

As the video plays, a chat feature sits on the right where friends can talk and share emojis. Video playback is synchronous, meaning the host can hit pause when someone needs to take a bathroom break and the video will pause for everyone.

Amazon had already launched a Watch Party feature for Prime Video, but hosted on Twitch. That option is a little more comprehensive, allowing streamers to broadcast a feed from their cameras alongside the video and basically commentate what they're watching. It'd be cool if Watch Party on the main Amazon site also allowed users to stream from their webcams so you can see your friends' reactions, but alas, it does not. Watch Party on Twitch also requires all viewers have Prime accounts.

It's still surprising that competitor Netflix doesn't have a similar feature yet. The concept of watch parties arguably started with a hacky browser extension called Netflix Party that allows people to watch that service together. For some reason, Netflix has resisted building the functionality directly into its product – maybe it thinks Netflix Party is good enough.

The internet is saving us right now — Watch parties are another example of how the internet, despite how much we love to hate it at times for enabling toxic behavior, is actually quite good at times like this when we can't easily be together with our loved ones. Just imagine if we didn't have all these advanced tools to mediate connection with those who matter to us. We'd surely be even more stir-crazy than we are now, if that's possible.