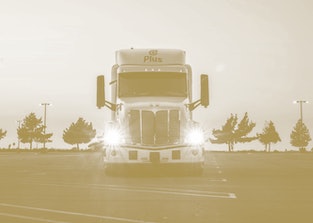 How many miles Plus' self-driving trucks can travel a day.

Amazon is hoping that driver-less autonomous trucks will someday power its vast delivery network. According to Bloomberg, the company has placed an order for 1,000 autonomous driving systems from Plus, a startup founded in 2016 to disrupt the long-haul trucking industry with self-driving technology.

As part of the deal, Amazon has the right to purchase up to 20 percent of the company itself. Plus is set to go public soon at a valuation of $3.3 billion. It’s raised more than $570 million to date and plans to begin mass production of its self-driving hardware later this year.

Asleep at the wheel — In the autonomous driving industry, long-haul trucking is considered somewhat of a low-hanging fruit as driving for long distances on open highways is inherently more predictable than driving on city streets. There aren’t pedestrians stepping out in front of traffic, or any other countless variables to train the systems against.

Plus only manufactures the self-driving sensor system and fleet operators are expected to bring their own trucks. The company has already deployed its self-driving tech in trucks through a partnership with Chinese delivery company SF Holding Co. The trucks can reportedly travel nearly 1,000 miles per day.

Owning the logistics — It’s no secret that Amazon is building its own logistics network to rival the likes of UPS and FedEx. It now employs more than a million workers globally, so even small reductions in cost on the margins can up add tremendously. The company previously invested in electric car startup Rivian, which is producing a fleet of 100,000 Amazon-branded delivery vehicles. Electric vehicles generally have low running and maintenance expenses compared to traditional combustion equivalents. Amazon says that the switch to electric is also in line with its commitment to protecting the environment.

Of course, the deal with Plus signals that Amazon is ready to replace human drivers as soon as possible. But that’s not a surprise, especially for Amazon, which has been replacing human labor with automation in various forms (i.e. robots in warehouses) for years. Not to mention, Amazon has always been particularly antagonistic towards its workers. A recent report suggested that soon-to-be-ex-CEO Jeff Bezos has a cynical view of them, believing that tough performance monitoring is necessary because people are “inherently lazy.”