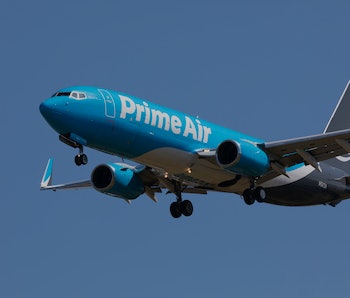 Amazon is buying up used aircraft while the travel industry continues to suffer at the hands of the ongoing coronavirus pandemic. The company has in recent years been developing its own logistics network to rival the likes of UPS and FedEx.

According to a press release issued Tuesday, Amazon has purchased seven aircraft from Delta and four from WestJet, with plans to begin using them to deliver goods by 2022. Heretofore most of Amazon's planes have been leased instead of bought outright. It currently has 80 jets in its fleet.

With many commercial airlines sitting on huge lease obligations for planes that are currently grounded, it seems likely Amazon was able to buy the jets at favorable terms. It's just another example of how Big Tech is shoring up dominance during the pandemic. Amazon has also used the period to hire more warehouse workers and open additional facilities as spending has shifted away from stores and online.

Charting its own path — To understand why Amazon wants its own logistics network, consider the holiday season of 2013, when millions of Amazon orders didn't arrive in time for Christmas due to delays from UPS and FedEx. That's something Amazon was very unhappy about as the fiasco risked denting all-important customer loyalty. The company started building out its air fleet in 2016.

Reducing its reliance on UPS and FedEx would give it more control over shipping speeds and help drive down costs — in the past year, Amazon spent $37.9 billion on shipping, up from $27.7 billion in 2019. Logistics has become a way for Amazon to make more money from the merchants that sell on its website. Independent sellers pay Amazon more in fees when it stores their goods in its warehouses and fulfills orders for them.

Logistics play — These investments in aircraft could pay off big time in the future if it means Amazon remains the fastest place to order items online. With each new plane it adds to its fleet, other e-commerce sites will find it just that much harder to compete. But if Amazon becomes the size of UPS or FedEx, it could also use the network to offer shipping to those rivals and therefore act as a platform akin to Apple's iOS or Google search, taking a cut of others' success who would come to rely on Amazon to deliver their goods.

Amazon delivers more than half of all its packages in the U.S., not just using its own planes but also an army of independent contractors who lease Amazon-branded trucks or deliver using their own private vehicles. It has been investing a lot of money into creating new electric vehicles and drones as a way to squeeze out any further efficiency gains that it can.