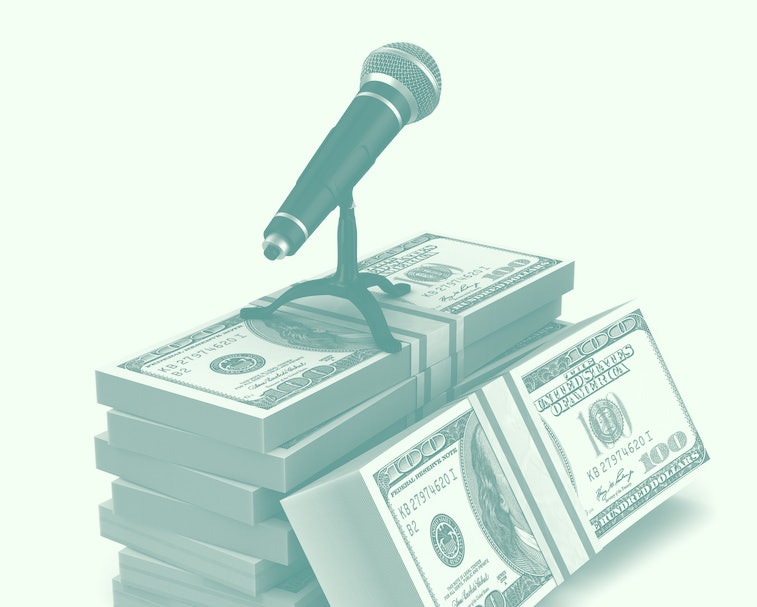 Amazon seems to have looked around and realized it could make money off of podcasts. The Amazon Music arm of the commerce giant acquired Wondery on Wednesday, but the deal has not been finalized.

Reporting on the negotiations from Bloomberg and The Wall Street Journal puts podcast publisher Wondery at roughly $300 million, but the price tag of the acquisition has not been confirmed. With a ballpark like that, however, it’s clear that Amazon is gunning to compete with Spotify’s ever-expanding podcast empire, and Amazon is rumored to have some money to throw around. Plus, Amazon Music only exists because Jeff Bezos willed it, so this may be another in a long line of dick-swinging contests from the world's richest person.

Tardy to the party — We first learned that Amazon Music and Audible were looking to get into the podcast game in the most on the nose way we could have. Amazon briefly attempted to prevent podcasters from being or running advertisements that are critical of the $1 trillion company with a history of abysmal working conditions, union-busting, and a slate of predatory business practices.

Persevering nonetheless, Amazon wants what Spotify has, or rather, what Spotify spent more than a billion dollars buying and advertising. In general terms, Amazon Music only has a fraction of Spotify’s user base, but it’s made steady gains, and podcast offerings will only sweeten the deal.

Wondery is the fourth most popular podcast publisher in the U.S. and has partnerships with other companies in the top 20, according to audience numbers from Podtrac. Known for podcasts like Dirty John and Dr. Death, Wondery is no stranger to business-related scandals with its founder Hernan Lopez currently battling corruption charges from his previous stint at Fox. Wall Street Journal reporter and lover of scoops Benjamin Mullin reports that Lopez will step down as CEO when the deal closes. COO Jen Sargent will then step up to manage Wondery.

Where are all the podcast companies? — With Spotify buying a podcast publisher or hosting platform at least twice a year, hosting platform Acast consuming advertising-insertion service Pippa, The New York Times acquiring Serial Productions, and now Amazon opening its purse strings, the podcast landscape is getting increasingly impersonal and consolidated.

Once you consider the companies that are both platforms and publishers, the likelihood of smaller players rising to the top seems small. That’s not to say that excellent shows and production companies haven’t always broken through, but the barriers to entry seem to be growing all the time.