“We all know this is retaliation. There’s no way around it. I took a huge stand, put my career on the line and I don’t regret it.” 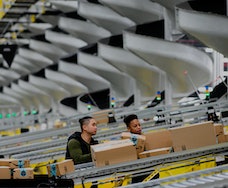 Amazon has fired an employee at its Staten Island warehouse after he participated in a planned walk-out protest. Amazon confirmed the firing to CNN Business, saying it was in response to the employee’s failure to comply with self-quarantine measures and not because of the walkout. The employee, Christian Smalls, had come into close contact with another Amazon worker with a confirmed case of the coronavirus.

“Despite the instruction to stay home with pay, he came onsite today, March 30, putting the teams at risk,” an Amazon spokesperson stated.

But Smalls does not believe Amazon’s reasoning. He had taken part in organizing the Staten Island warehouse protest, which asked Amazon to shut down the warehouse for deep cleaning. Two hours after the protest he was fired over the phone.

Regardless of the reasons behind it, Amazon’s firing of Smalls is a callous move that goes against the company’s claims that it cares about its workers and their wellbeing.

Retaliation, maybe — Smalls is not surprised by his firing. In fact, he says multiple co-workers had warned him it was likely. But that doesn’t mean he’s okay with it.

“For them to do it this way, and for the reasoning behind it, that tells you right there that they, number one, don’t care about people, and number two, it’s just a target, a straight up target,” Smalls said in a phone interview.

Amazon did not go through its usual termination process in Smalls’ case. Usually, the company issues at least one verbal warning to an employee, followed next by a write-up about the issue if it persists, with termination as a last resort. Smalls has watched this process many times in his five years at Amazon, and he’s understandably upset that the usual process wasn't followed in his case.

Some officials are on his side — Smalls hopes to visit City Hall in the near future to ask government officials to intervene. Already he has some support behind him; New York’s attorney general Letitia James said Monday night that “it is disgraceful that Amazon would terminate an employee who bravely stood up to protect himself and his colleagues.”

She added, “At a time when so many New Yorkers are struggling and are deeply concerned about their safety, this action was also immoral and inhumane."

More than a dozen workers took part in the Staten Island warehouse’s walk-out protest on Monday. At time of writing, only Smalls has had his employment terminated.

Amazon is really struggling right now — Despite its best efforts to keep up with increased home delivery demands due to the COVID-19 pandemic, Amazon can’t keep up. The company is struggling to stay on top of the price-gouging taking over its massive marketplace, and it's taking flak for asking customers to contribute to its $25 million drivers’ sick leave fund.

And yet, the company is still attempting to present a picture of business as usual. It’s still planning to hold its annual Prime Day sale in mid-July. While most sectors deal with mass layoffs and furloughs due to stay-at-home measures, Amazon is looking to hire 100,000 people to keep up with increased demand.

Amazon claims to care about its workers. The company constantly reminds the public that its top priority is the health and safety of employees. And yet Amazon refuses to listen to its workers when they voice concerns about that safety.

The reason for Smalls’ firing is unclear. He’s pretty sure it’s related to the walk-out, but Amazon will never fess up to that even if it is the case. Either way, the firing goes directly against Amazon’s supposed care for its workforce. The company has left Smalls without any income at a time when money is much more difficult than usual to come by. That’s cold, even by Amazon’s icy standards.