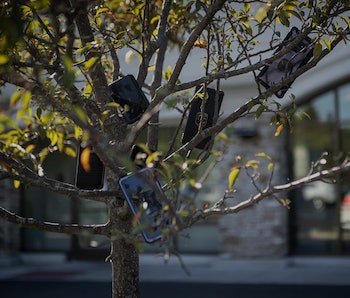 A new report in Bloomberg says some of Amazon's independent drivers have found a hack to snap up gigs faster than the competition by hanging smartphones in the trees surrounding delivery facilities. Experts say that Amazon's algorithms detect which drivers are closest to the warehouse and offers them lucrative delivery opportunities before anyone else.

The system is coordinated through Amazon's lesser-known Flex delivery service, which the company launched to supplement UPS and USPS with gig workers who can ferry goods from warehouses to customer's doors within an hour or two in urban areas.

According to the report, the phones are synchronized with a driver's real phone, so they can be sitting in the parking lot in their cars and have a slight edge over other drivers in the same area. Some will even place multiple phones in a tree and act as a dispatcher, arbitraging by handing out gigs to other drivers in exchange for a cut.

This is desperation — It's not clear exactly how many people are using this hack, but it's still sad and points to deeper issues. These are low-paying gigs that people are aggressively fighting for. They'll maybe net $15-$18 for an hour of work, and that doesn't account for expenses like gas and car maintenance. Amazon meanwhile has been killing it during the coronavirus pandemic.

Demand for home delivery is way up thanks to shuttered stores, and Amazon has a new supply of workers desperate for what they can get. Because the drivers are contractors, Amazon doesn't pay them for idle time when they're waiting for another delivery, nor do they receive benefits like paid time off.

Blurred lines — The argument that gig economy companies make is that their workers are contractors because they have the flexibility to choose which jobs they want to take. Clearly, however, many drivers sit around waiting to take the next job as soon as it becomes available. That's acting like an employee.

There's some validity to the idea that a college kid driving for Uber on the side isn't necessarily filling the same role as an employee, because they're benefiting from the flexibility to make some quick cash on their own time. But many gig workers treat the jobs like real full-time gigs and these companies in the industry know that.

Exploitation — This particular hack on the part of Flex drivers worked great for Amazon because it ensures jobs are getting accepted quickly and efficiently, saving the company money, and it basically has full-time employees working for below full-time wages. Apparently the company was well aware of the phenomena but is now "investigating" since the story broke.

Amazon treats its hourly workers poorly in other ways, such as by asking customers to donate funds to pay for drivers' sick leave. Because hourly workers are so poorly compensated, reports have indicated that many have been eligible for food stamps, meaning Amazon is passing on costs to the public at large. In response to workers' organizing efforts, Amazon recently began recruiting for a position that would entail monitoring workers for any discussions regarding potential unionization.

Back in July, Amazon reported revenue of $88.9 billion and net income of $5.3 billion. CEO Jeff Bezos has added more than $74 billion to his net worth since the start of 2020.