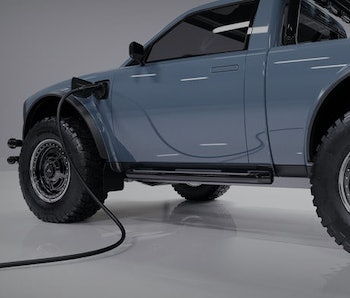 Alpha Motor says it will show off its Wolf electric pickup truck next week at the Petersen Museum in Los Angeles. The mysterious automaker follows in the footsteps of Tesla, which has used the museum to debut prototypes for some of its latest vehicles, including the planned Roadster and Cybertruck. Electrek earlier reported on the news.

Little is known about Alpha Motor, which has led to skepticism that the company will be able to produce its promised $36,000 battery-powered pickup truck. A cursory investigation by Electrek earlier this year found just two employees listed on LinkedIn, with one being a copywriter who previously wrote press releases for an electric vehicle startup that quietly vanished without ever producing a vehicle. The other employee listed no other work experience.

Plenty of questions — It’s possible that Alpha is remaining secretive as a strategy to surprise competitors in the space, like the Amazon-funded Rivian, which is also developing its own electric pickups. But we’ve seen other entrants capitalize on EV excitement to make bold proclamations about their plans, only to crash and burn after spending hundreds of millions of dollars.

Perhaps most famously, Nikola promised to make its own electric pickup truck, the Badger, only to collapse under controversy after regulators found its founder lied that its hydrogen semi-truck was operational when it really wasn’t yet working. There’s a difference between exaggerating progress and straight-up lying that you’ve accomplished something you haven’t.

Nikola managed to raise nearly a billion dollars on the promise of making electric semi-trucks, and inked a major deal with General Motors to get to production. But the company says it expects to produce just 25 of its pricey long-haul trucks by the end of 2021, while the pickup truck — really a side project for the company — is all but dead.

Huge costs — Alpha is promising a much more affordable car, which would likely require billions of dollars and a deal with a battery make to produce. Reaching such competitive prices requires economies of scale. A battery factory needs to be constructed at a major cost, and then hundreds of thousands of cars need to be produced to drive the cost down enough to reach a $36,000 price. There’s a reason why companies including Faraday Future, Rivian, and Lucid have raised billions of dollars to fund their ambitions, but there’s nothing known about how much Alpha has raised, if anything. So, its employees’ history of writing press releases for a previous vaporware electric car company has us worried.

The cynical take is that Alpha could be trying a similar playbook as Nikola, making bold claims to raise money that enriches its founders before a promised car is anywhere near production. Even after he’s been indicted on fraud, Nikola’s Trevor Milton walked away with billions and continues dumping shares valued at tens of millions of dollars — all with nothing to show for it — not even a single car produced... just billions of dollars lost by Nikola’s investors. The company could still overcome its obstacles to produce the Nikola One semi-truck, but significant doubts remain.

We like the design of the Wolf from what we’ve seen, but the path to becoming the next Tesla is littered with failures — we don’t even talk about Fisker anymore (though it’s trying again after going bankrupt), nor Dyson’s abandoned £500 million effort to make a car. Needless to say, we’re skeptical of Alpha Motors until we get much more information. But we’d also love to be proven wrong.